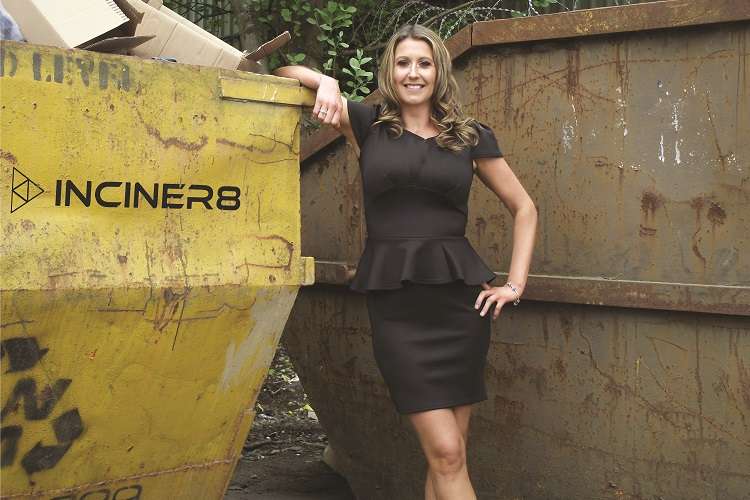 SHE loves her job, and she’s a little bit CRAZY – especially once the cocktails kick in.

Looking pretty good, Louise. If you don’t mind us asking, what age are you?

Crumbs, you scared us there. When not winding people up, where do you work?

Inciner8 Ltd. it’s a successful manufacturing company based in Southport. I’m an Operations and Finance Assistant, and I love it. I have the best bosses in the world!

Some might say they have the best Operations and Finance Assistant in the world. How long have you worked there, and exactly what do you do?

I started as a receptionist approximately two years ago, managing the phones. Today I am responsible for supporting Ops and Finance. It’s such an exciting time to be involved with Inciner8, no two days are ever the same. We’re growing rapidly due to our happy customers from all over the world. We have won 2 Queens Awards: ‘giz another one!

Sounds like you quite enjoy it. What’s the best bit?

The people. No question, I love them all. Our Chairman, Vince Ferguson is as down to earth as the rest of us. The first thing I noticed when I started was just how approachable and friendly everyone was.

The UHT milk in our store cupboard. It’s pretty rank.

With you on that one. What about after work?

I have a three year old boy called Freddie. He’s my world. Everything I do is for him – and I do everything for him, so that takes up my time! How old do they have to be again when they move out?

Keep doing everything for him, and he’ll never move out. Craziest thing you’ve done?

People who know me use the word ‘crazy’ to describe me in general. I don’t know what all the fuss is about though.

What’s your idea of a romantic night out – and who would be your ideal date?

Tom Hardy. He could show me the insides of a skip any day.

Enough of that talk young lady. Now what about your superhero powers?

Every day I am a different superhero. I have to be exactly who my superhero obsessed child tells me to be. An ability to make washing up disappear wouldn’t be a bad power to have.

‘Oops I did it again:’ but NOT because I like Britney Spears.

We hear you! Got a fascinating fact to share with us?

I free-falled 10,000ft from an aeroplane at 120mph to raise money for Muscular Dystrophy research.

Now that’s impressive! Sum yourself up in three words.

Ah… but, can you make us laugh?

There were two cows in a field. One said “Moooooooooooo…” The other one said “Hey! I was just about to say that!”

It’s the way you tell them… What fashion disasters have you experienced?

I don’t know about fashion disasters, but I’ve had rather a few tanning disasters. I’ll share a secret with you…. sometimes I only tan the bits that YOU can see.

If it’s AM it’s a full English with all the trimmings, and if its PM it’s a roast dinner.

Poor Theresa. Talking of which, ever met a celebrity?

I was on a night out in Gran Canaria, when I spotted Craig from Big Brother. I started to shout ‘Craig! Craig!’ He looked at me and began edging away. I started walking towards him. He started to run. I’m chasing him around like an absolute weirdo while bystanders were genuinely concerned for his safety. The thing is I don’t even like him. Just shows what a couple of cocktails can do to you!

Reckon we can guess the answer to this: social media – or social down the pub?

Definitely down the pub. Love a good old catch up and a serious natter. Oh and the odd game of pool if there’s a table. Just call me ‘Thunderbolt Byrne!’

Imagine winning millions on the Lottery. What would you buy?

It doesn’t appeal to me one bit. I couldn’t think of anything worse than dreaming about this all week. Every Saturday night I’d have to remember I’m back to work first thing Monday morning.

Well Louise, you’ve certainly won a prize with us. You’ve been a superb Skip Chick.