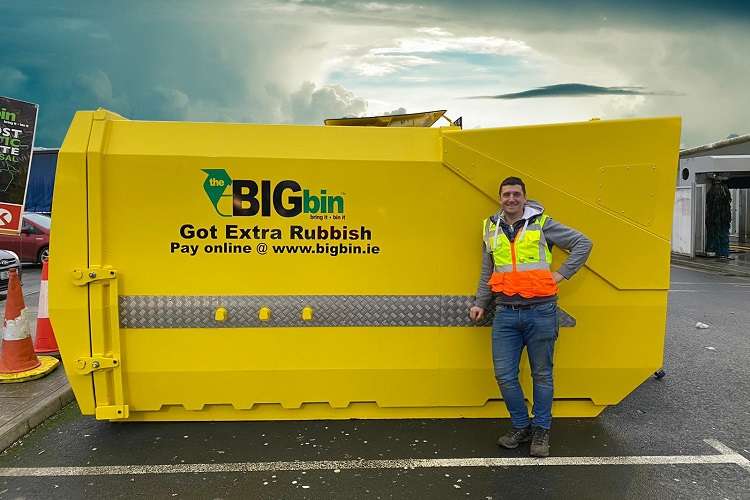 THEY are the workforce of the future: super smart, with an amazing ability to learn fast and work safely, efficiently and at lightning speed.

And when it comes to sorting waste, robots and the futuristic technology that accompanies them have just taken a giant leap closer to becoming a little more commonplace than before.

Undeterred by the pandemic, Colm Grimes last year set about establishing an innovative new business intended to thrust the waste sector in the UK and Ireland into the 21st century world of robots, artificial intelligence, big data and the Internet of Things.

REP-TEC was fully launched last August. The firm’s first newsletter states its case in ambitious terms: “We set out to improve global resource efficiency and give our people the confidence to know they can take on the world,” it says.

“We started with a blank page and tried to build a business that was relevant, a little different from others, and one that people wanted to be part of.”

A year on, and as well as manufacturing and supplying an efficient and innovative range of balers, compactors and conveyors, REP-TEC’s partnership with one of the world’s leading waste sector robotics specialists offers waste operators scope to automate the way their waste is handled, cutting staff costs, improving safety and gaining a better understanding of the material they handle in the process.

The more the high-speed, intelligent robotic waste sorting cells interact with their AI counterparts, the cleverer the system becomes, continuously learning and removing the risk of errors, improving outcomes and becoming more efficient as it goes.
Using artificial intelligence (AI) technology, for example, computer vision – either retro-fitted to existing kit or incorporated into its own products – can identify materials for recycling with an accuracy rate of 99%.

Placed alongside robotic sorting of material, it can achieve a pick rate of upwards of 80 items per minute: twice as fast as manual, with greater accuracy, consistency and less risk of harm to operators.

Launching a business during a pandemic – and one that would challenge customers to consider the benefits of introducing robot technology to their operation – was less risky than it sounds, says Colm.

The former managing director of waste recycling equipment manufacturer and supplier CK International Ltd, he already had a strong network of international contacts and a firm grasp of how technology could improve the sector.

“I was with that business for about 12 years, first as a design engineer and then moving through various roles,” he says. “The last six years I was managing director and led them through a good period of growth.”
The down time of the pandemic gave the father of three a chance to plan his next step.

“I had a good history of growing a business and a good network across the recycling industry. I saw the advantage of AI and using more robots. I had the belief that we could make something happen.”

Having launched REP-TEC, he forged a partnership with Colorado-based AMP Robotics, a global leader in applying AI and robotics to waste recycling infrastructure. Hundreds of its systems are already bringing benefits to waste operators across three continents.

Introducing high tech robotics to a sector so reliant on manual labour inevitably disrupts jobs, but Colm argues the business benefits are huge. And plenty of operators are showing an interest.

“People want to talk about robots,” he says. “And when you want to improve productivity, there’s a very good business case for robotics.”

Workers – often in short supply when it comes to picking waste from a conveyor belt – can easily be redeployed, he adds. With machines doing the dirty work, the risk of injuries is removed.

“There’s a clear return on investment (ROI) for the customers we are targeting,” he adds. “Say every robot can release two manual pickers. Look at that across a plant working 24 hours over seven days a week, with two people on every shift.

“For some customers, the ROI is under 18 months – it’s a no-brainer. While it’s a big investment, it can be easily balanced.”

With automation comes the opportunity to exploit the benefits of artificial intelligence and machine learning, helping businesses further improve efficiency.

“AMP Robotics has a vision system that will monitor material on the conveyor, which will identify and classify waste types,” he explains.

“It can tell how many Coke bottles have run through the plant in a day, right down to the brand. While infrared technology is good at identifying material composition, there can be a lot of nuanced issues which AI can solve.

“For example, one guy we were talking to has a problem with Heinz ketchup bottles where the material is clear PET and he wants to keep that and process it, but the technology will identify it as a red bottle, and not a clear bottle.

“However, AI will know that the bottle has red residues and is fine for processing.”

As machines talk to each other as they work, there’s the chance to gather ‘big data’, helping to identify areas of concern and opportunities to introduce new efficiencies.

It doesn’t have to mean ripping out plant and installing all new equipment: REP-TEC can retrofit to existing plant, incorporate it into its own range of equipment or have its specialist in-house design team develop a system to the customer’s own specifications.

From Dungannon in Northern Ireland – an area known for high quality manufacturing – REP-TEC delivers its own impressive range of kit. It includes a high-performance twin ram baler range which uses industry leading hydraulic and electric components, IOT capability offering ‘real time’ reports, the ability to process up to 30 tonnes per hour, and with the options to be custom-built to suit various loading methods.

Its conveyors can be built to individual specifications or upgraded as required, while Colm is particularly proud of REP-TEC’s portable compactor with built-in weighing technology.

Developed with BIGbin, it uses a keypad-activated automated loading drum to receive and charge customers for using the machine. Waste is weighed during each transaction and recorded against the customer – offering a 24/7 operation across a range of situations such as airports, shopping centres and multi-tenancy buildings.

“It’s a nice, niche product that people are really excited about,” he adds.

From a standing start last August, REP-TEC has grown to employ a dozen people across various roles, with links to firms across the UK which can provide close-at-hand customer support.

Colm believes the future of waste is definitely in robotic hands: “In North America and Japan, technology like this has been deployed for a few years: the UK and Ireland is running behind and everyone we talk to acknowledges that.

“We have a nice product at a nice time, and we can shape the market and influence it.

“We’re different, innovative, a bit edgy,” he adds. “I didn’t want to be a business doing the same as others are doing.

“I want to embrace new technology, provide a world class service and grow the business.”