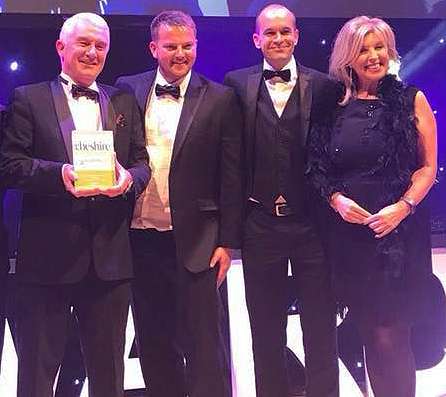 The ASH Group, which oversee Alan’s Skips, ASH Waste Services and Nationwide Waste Services from their Flintshire base, collected a prestigious award for Corporate Social Responsibility at the 2017 Cheshire Business Awards.

They received the award at Chester Cathedral for an innovative restoration project at the Cambrian Quarry at Gwernymynydd, near Mold.

Despite considerable issues, the Welsh-based company successfully restored the quarry back to the natural state, with the introduction of 500,000m³  of inert material.

The ASH Group stabilised quarry walls, with the aim of fully restoring the landscape and returning it to the local community as an area which can be safely enjoyed.

The company hosted liaison meetings with councillors, residents and environmental regulators and despite some early opposition, are now seen as a vital part of the community. ASH Group will continue to work closely with local schools, councils and are committed to restoring the quarry for the enjoyment of everyone in the village.

The ASH Group team based at the Cambrian Quarry and the firm’s Environmental, Planning and Operations teams worked tirelessly to ensure the work carried out was of real benefit for the local community.