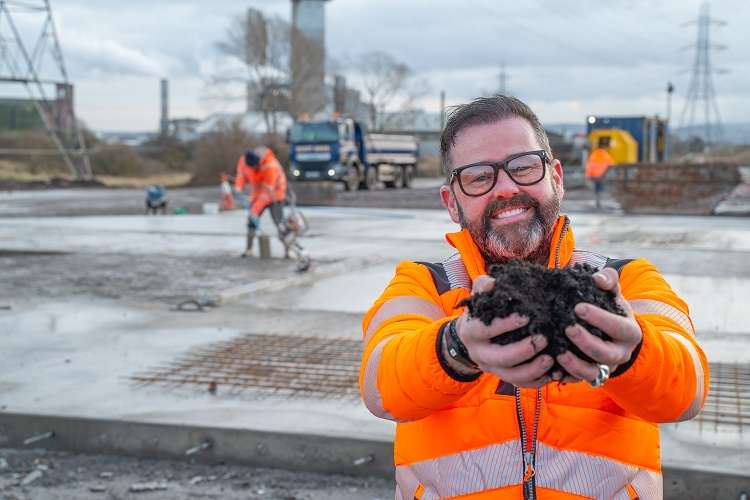 RECYCLING experts from Scott Bros are demonstrating the benefits of Teesside’s circular economy as they expand its composting operation – using recycled materials to reduce the amount of waste generated.

The family-run firm is using sharp sand it has previously reclaimed from excavation and construction waste as part of a project to extend the impermeable concrete pad used in the curing process.

Once the work is complete, it will increase the amount of green waste able to be converted into commercial compost – which has quadrupled over the last four years – which in turn could create extra jobs.

The cost-effective product is then sold for use in the construction industry, reducing the amount of environmental damage caused in the quarrying and production of primary materials.

One of its customers is Billingham-based Minimix which uses the sand in the ready-mixed concrete being used to extend the concrete pad by 30%.

Large amounts of green waste, collected from commercial customers including Middlesbrough, Stockton and Redcar & Cleveland councils, is brought to its site at Norton Bottoms, adjacent to the A19 flyover.

The waste is then shredded, reducing composition time to encourage the movement of microbes, before being placed into ‘wind rows’ on the impervious concrete pad as part of the windrow composting process – best suited to producing large volumes of compost.

Once it has undergone an eight-week sanitisation and stabilisation process, it is used as a soil improver and in land restoration.

Director David Scott Jr, who oversees the composting operation, said: “This is a perfect demonstration of the benefits of Teesside’s circular economy – using recycled materials to help us recycle even more material.

“Scott Bros. is dedicated to reusing and extending the life of the earth’s resources whilst at the same time creating jobs and contributing to the region’s economy.”