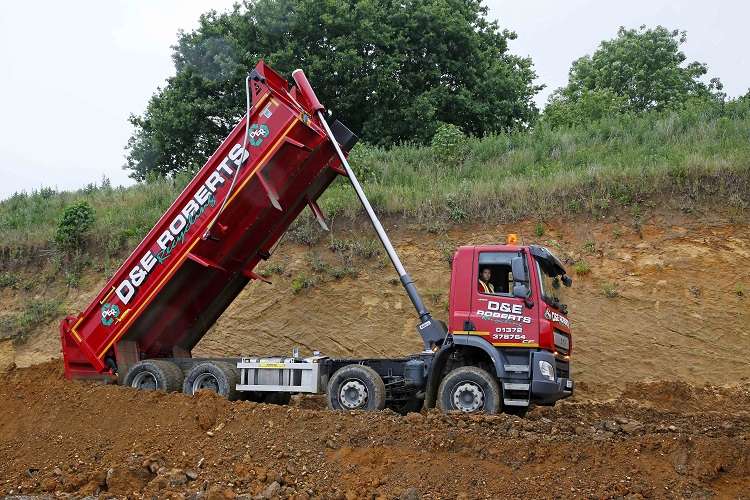 HAVING recently spent over £4m upgrading its factories, Thompsons is now starting to realise the significant benefits of investing in high technology automated production systems.

Particularly notable is that these advances are also being quickly recognised by long – standing customers such as D&E Roberts Ltd of Leatherhead in Surrey.

Director Dave Roberts said: “We’ve long preferred Thompsons’ bodies, but in the recent past, such was the demand for them that we found their delivery times just getting longer and longer, so regrettably we had to look elsewhere. However, we’ve been impressed by the way Thompsons has really tackled the issue head-on by committing to such a large investment programme to boost production capacity in its factories.

“As a result, we’ve just taken four new Loadmasters into our fleet, three being standard front-end tippers, the fourth a tipper grab. And we can see that the new factory systems are bringing other benefits too because our new vehicles show that Thompsons’ product quality is now actually better than ever.”

Key areas of Thompsons’ factory improvements are a new Trumpf 3030 laser cutter installed in the Croydon factory that combines not only higher production levels of many individual body parts, but also delivering these to an even higher standard of quality and accuracy. Of perhaps even greater significance, Thompsons’ northern operation in Blackburn has grown still further with the acquisition of a fourth factory. This site is now home to a new, automated robot welding system that can reduce the welding time required for bodysides and tailgates by over 80%.

Also just installed at Site 4 is a brand new Trumpf 8600 brake press to ramp up production of full length bodysides. Additionally, state of the art multi-bay paintshops have also been installed in both Croydon and Blackburn.

Reflecting on the biggest investment programme in Thompsons history, Joint Managing Director Scott Burton said: “Last year, every penny of our profits was put back into the business, plus a lot more money as well. Let no-one be in any doubt that we are fully committed to the long term, and to lead the industry in everything that we do. D&E Roberts has been buying our tipper bodies since the early ’90’s, so we are delighted that customers are now recognising the on-going efforts that we are making to boost production capacity and extend even further our product quality. I thank Dave for his renewed confidence in us.”