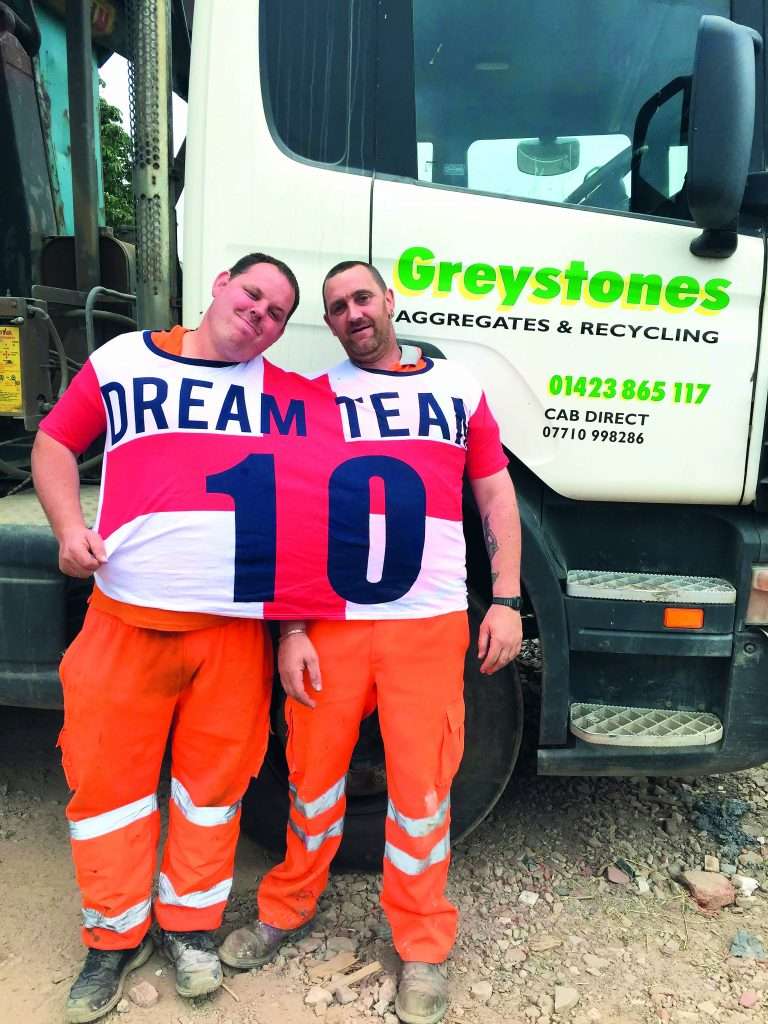 TO ME TO YOU… The Muckle Brothers are a dream team

I’m Neil, and I’m 35. I work at Greystones Aggregates & Recycling as an HGV driver and yard assistant.

It’s just like listening to Ant and Dec! Tell us more – like how long you’ve been there, and what you do.

What’s the best thing about working there?

Neil: There’s a running joke – the business has two owners, one I call grandad, the other silverback.

Tim: We all have a laugh and take the mickey out of each other.

Sounds like you’re a right pair of jokers. What bits could you live without?

Tim: Skips with water in them, and big lumps of concrete.

Not sure what bikes have ever done to you! Any memorable moments to share?

Neil: Backing an eight ft wide truck into a 40ft doorway and missing. It was one week after my test and one bent truck.

Tim: I once lost some bales of straw off a trailer, which happened to land in a lady’s garden – and she’d just sold the house.

The Chuckle Brothers had nothing on you two. What’s happening after work?

Neil: Helping at a local farm in the summer.

Tim: Relaxing after work during the week, and at weekends I go out.

Go crazy guys! Speaking of which, what’s the craziest thing you’ve ever done?

Neil: Left the bosses’ kids in the yard, and learned expanding foam and kids are not a good combination.

Tim:  I used to love having play fights with skid steer loaders.

Getting romantic now, what’s your idea of a romantic night out – and who with?

Neil: Skip upside down in a dusty yard with fish and chips. And I have to say that is with my wife!

Tim: Curry night with my partner.

Not exactly Paris by moonlight chaps. Anyway, what kind of super power would you have?

Neil: A pause button for when the bosses start moaning.

Tim: I’d be invisible, that way I wouldn’t get into trouble.

What would be the theme tune for both of you?

Tim: Paradise by George Ezra, because I’d like to go to the Bahamas.

Neil: I passed my driving test two years ago but haven’t bothered driving a car. I have passed class 2 and I’m ready for HGV.

Tim: I’ll turn my hands to anything, if I can.

Have a bash at summing yourselves up in three words each.

Okay then… make us laugh!

Neil: My wife told me sex was better on holiday. That was a nice postcard to receive.

Tim: What do you call a cow with no legs? Ground beef!

Apart from the day-glo safety vests that are obviously de rigour at Greystones Aggregates & Recycling, have you had any fashion disasters?

Neil: Skip finds. Mickey Mouse ears, which I wore for a week.

Tim: Putting on a t-shirt back to back and going out wearing it.

No-one will notice under the hi-vis Tim. When you’re cooking, what’s your speciality dish?

Nice and simple, say no more! If you ruled the world, what laws would you introduce?

Neil: Every Monday is a national holiday.

Tim: Looks like Tim’s decided to take a break.

Ever met a celebrity?

Tim: I met Ronnie, Amy and Johnny from Lizard Lick.

Mingling with the stars indeed! Social media – or social down the pub?

Neil: Social down the pub.

Tim: Social and screen time down the pub.

Imagine winning millions on the Lottery. What would you both buy?

Neil: A 150-acre farm, all the machinery, and multiple springer spaniels.

Tim: I’d buy a farm with a big house and lots of land.

Well lads, even if your numbers don’t come up, you’re both still winners to us.  Just don’t give up the day job!