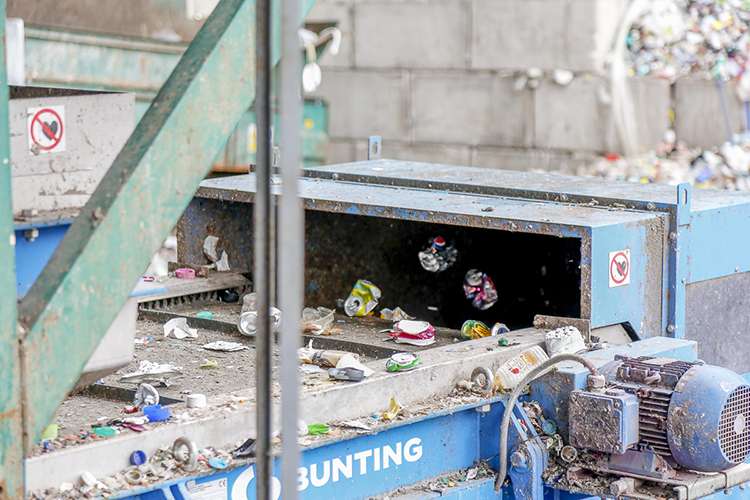 At the Deeside recycling facility, Parry & Evans process approximately 110,000 tonnes of pre-sorted domestic refuse annually, received from North Wales councils including Flintshire. The received waste is a mix of plastic bottles and containers, metals (such as cans and trays) and other recyclable materials. The aim of the operation is to recycle 100% of the waste.

The magnetic separators are located on a dedicated recycling line that only operates at night. In operation, approximately 2 tonnes per hour of material feeds up an incline conveyor and under the suspended Bunting Permanent Overband Magnet. Steel is attracted up and out of the conveyed burden towards the magnet face onto the continuously moving cleaning belt of the Overband Magnet. This belt transfers the separated steel into a designated collection area at a rate of approximately 500 kg/hr.

The remaining waste passes through a picking area to remove oversize material such as buckets and drums, as well as any loose plastic bags. After passing through a plastic bottle crusher, which pierces the bottle to release any entrapped air and reduce the volume, the waste feeds onto Bunting’s Metal Separation Module, which includes two Vibratory Feeders, one high-intensity Drum Magnet, and an Eddy Current Separator.

After the bottle crusher, a conveyor feeds the waste onto the first Vibratory Feeder, which spreads the material across the full 1-metre width as well as liberating entrapments. The waste flows onto the rotating outer shell of a high-strength Drum Magnet. Stationary inside the Drum Magnet shell is a fixed magnet element constructed out of neodymium iron boron permanent magnets. Any small ferrous metal or magnetic particle is attracted and held to the surface of the rotating Drum Magnet shell before being transported and deposited underneath in a collection area.

The remaining ferrous-free fraction falls onto a second Vibratory Feeder that transfers the waste onto the faster moving belt of the Eddy Current Separator.

In the Parry & Evans operation, approximately 300 kg/hr of non-ferrous metals such as aluminium drinks cans and aluminium trays are forcibly ejected over the splitter and moved into a collection area on a small conveyor.

On the site, the combination of the Overband Magnet, Drum Magnet and Eddy Current Separator recover approximately 800 kg/hr of metal, which helps ensure the financial viability of this part of the Parry & Evans recycling operation.