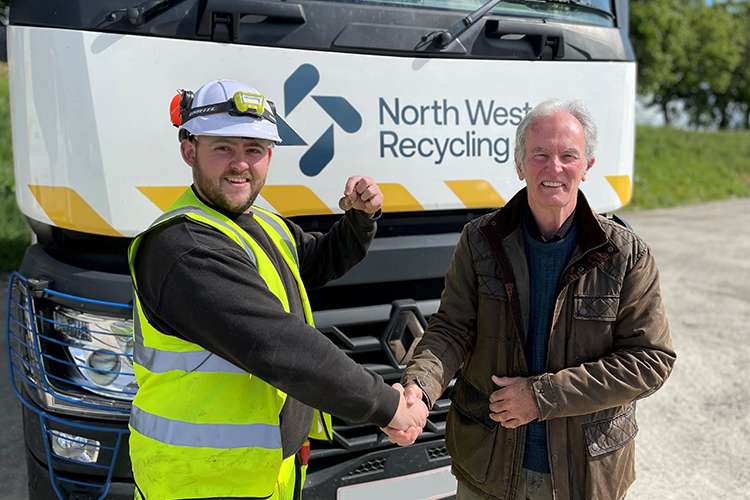 A WAR medal found at a Cumbrian waste plant has been reunited with the owner’s descendant after a remarkable effort to unravel its history.

The First World War medal was found by North West Recycling’s electrical engineer Dean Donald, who spotted it lying on the ground close to a scrap metal container at the firm’s site in Rockcliffe, near Carlisle.

Dean, who has a military background, was immediately interested. Having spotted the inscription on its edge which revealed the recipient’s identity number, rank and surname – Private A. Roberts – 73441 – he set out to find out more.

He checked war records which revealed the soldier’s first name was Archie, and that he served with the Welsh Regiment.

Dean also scoured family history website ‘Ancestry’, in the hope of finding clues that would lead him to family members.

It lead him to Archie’s brother, who lived in Llandudno, and eventually to his great nephew, Mark L. Roberts.

“It didn’t take me that long to research as I study my own family history,” said Dean.

“I was uncertain if it was actually him, but the family trees linked up perfectly, so I got in touch with a Penrith community group on social media and Mark’s wife got back in touch.”

The bronze Allied Victory Medal depicts the winged figure of Victory on the front and on the back reads: “The Great War for Civilisation 1914-1919”.

To qualify, the service personnel would have to have entered a theatre of war. Approximately 5.7 million Victory Medals were issued.

During the First World War, the Welsh Regiment raised 34 battalions who went on to fight at Gallipoli, Salonika, Egypt, Palestine and Mesopotamia as well as on the Western Front.

Mr Roberts was delighted to receive the medal, although baffled as to how it ended up at North West Recycling.

“How the medal came from Llandudno to a recycling depot in Carlisle, I’ll never know,” he said. “I’m the only member of the family who lives in Cumbria as my father came to live here in 1948. The chances of both the medal and myself being in the same area are pretty slim.”

Dean said: “We owed it to the family to try and return such an important piece of history.”

Founded in 1995 by owner Rick Allan, North West Recycling has evolved from the small, farm-based Brampton Skips to become the largest private waste management company in Cumbria, with 2,500-plus skips, license for up to 40 wagons, and purpose-built MRF and SRF production.