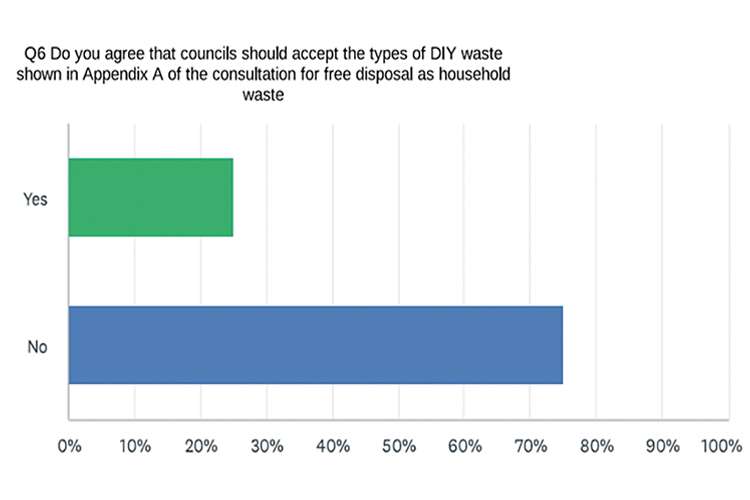 A SURVEY among the Local Authority Recycling Advisory Committee (LARAC) members revealed that 75% of respondents ‘do not believe that councils should accept [DIY] wastes for free disposal’.

The findings come after DEFRA announced plans to tackle fly-tipping by changing the legal definition of ‘household waste’ (which is free to deposit at HWRCs) to include DIY waste such as bricks, tiles and roofing material.

However, questions have been raised about whether the new legislation would be effective in tackling the fly-tippers.

“Respondents stated that the number of fly tips being reported as DIY wastes are under 10% so LARAC cannot see how this will have the stated aim of significantly reducing fly tipping,” explained John Coates, LARAC’s Head of External Affairs.

“Indeed, there is evidence that introducing charges does not increase fly tipping.”

He went on to say that building, roofing, plumbing, etc, work, is often carried out by skilled professionals who, as per the recent consultations on the reform of waste carrier, broker, dealer restrictions, would then take ownership of the waste.

“Whilst LARAC understands that residents should be allowed to dispose of small quantities of DIY waste, for example when digging flower beds (soil) or demolishing a garden wall (rubble), as they cannot be disposed of through kerbside collections, many respondents believe the proposals are too generous and unworkable.”

LARAC also warned that HWRCs may find themselves having to shoulder a greater financial burden, as certain materials common in DIY waste, such as plasterboard or ceramics, are problematic or expensive to deal with.

“Many respondents state that the proposals could mean the closure of some HWRC sites to cover the increased costs of accepting these materials if charges cannot be levied, or the removal of non-statutory waste streams or reduction of containers for household wastes and recycling at HWRC sites to make room for the containers to be able to receive these DIY wastes,” continued John.

“These proposals seem to be for the convenience of a few householders and contrary to the waste hierarchy and established practices in many councils which have the support of their local communities and are excellent examples of local democracy in action.”