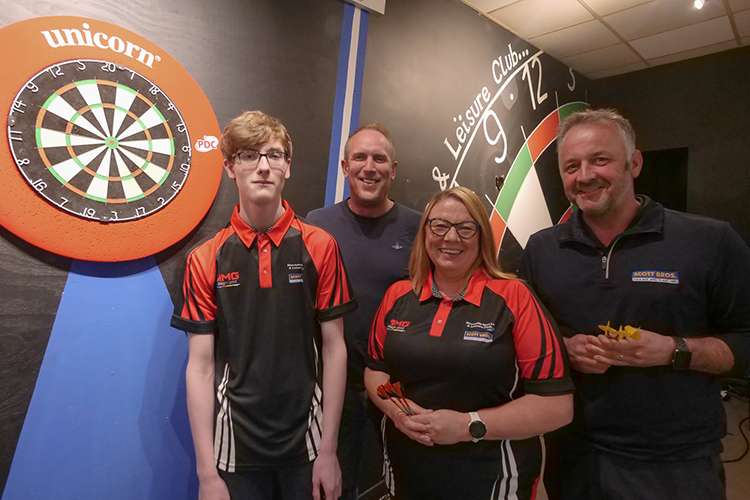 TALENTED mathematician George Ripley is hoping to emulate darts hero Glenn Durrant by being number one.

The 16-year-old, from Middlesbrough, has already made an encouraging start to his career having reached the final 16 of the Junior World Championships.

In the two years he has been registered with the Junior Darts Corporation and England Youth Darts, George – who is now being sponsored by recycling experts Scott Bros – has finished 11th and 12th overall in the country.

This allowed him to qualify for the Advanced Tour, involving the country’s top 32 players, and he will again play in this November’s Junior World Championships. As a member of England Youth Darts he has also twice qualified for the England Youth Grand Prix.

The deal with Scott Bros will provide George with a branded shirt and will help fund equipment and the costs involved in travelling to nationwide tournaments, as well as fees.

Director Peter Scott, who also runs Thornaby Sports and Leisure Club said: “We like to encourage the next generation of sporting talent and as a business we would love to help George achieve his dream of making a real impact in the world of darts.”

Team manager Marie Bulmer Dobson invited him to join Cleveland Youth Darts, which he continues to represent, along with Thornaby Sports and Leisure Club, where he plays in the men’s Super League Division A. She said: “There’s no doubt that George has the talent and dedication required to be a real success on the national and professional stage and I look forward to seeing him progress further.”

George added: “Despite everything, one of my greatest achievements was being asked to represent Cleveland County Youth and I hope this year we can win the league.”