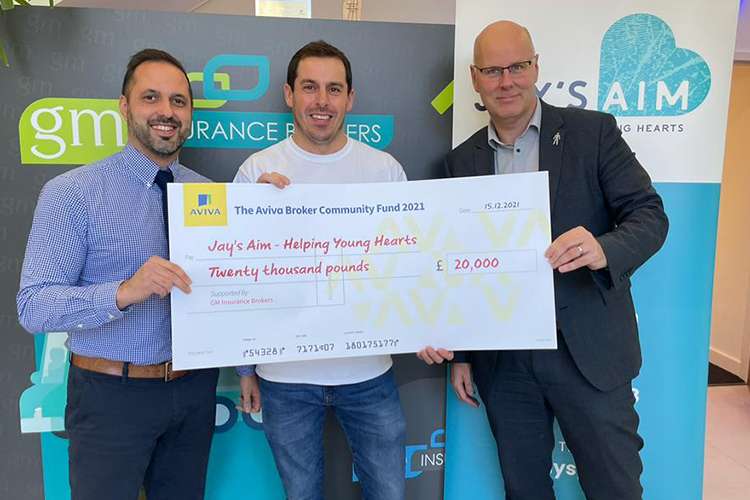 GM Insurance flies the flag for cardio cause

COMMERCIAL insurance specialists, GM Insurance, have rallied behind charity Jay’s Aim, in their efforts to protect the nation’s hearts.

The Exeter-based business, which is a one-stop-shop insurance brokerage for skip hire, waste and construction companies, teamed up with Aviva to secure £20,000 in funding through the 2021 Aviva Company Broker Fund and used that to support the local charity’s cause.

Jay’s Aim works tirelessly to promote awareness of inherited cardiac conditions, train people in how to respond to an emergency, and provide public access defibrillators (PADs) in the South-West area.

The charity was founded in 2018 with the goal of reducing the rate of sudden cardiac deaths among young people and was set up in memory of Jay Osborne from Exeter, who died suddenly from cardiac arrest in 2017 at the age of just 28.

According to the British Heart Foundation, it is estimated that 12 people below the age of 35 die every week in the UK from undiagnosed heart conditions, many of them with no prior symptoms. Also, when somebody has a cardiac arrest, their chance of survival is 74% provided they receive effective CPR immediately and a defibrillator is used on them in the first three-to-five minutes.

GM Insurance’s company director Lee Galan was very close to Jay Osborne. “I grew up with Jay and his siblings since he was born, so basically, we were lifelong friends. We were both Exeter based, having originally grown up in Bude, Cornwall. We were also Spurs and Exeter Chiefs fans.

“Jay had a very normal and happy life.

“For such a shocking event to happen to someone at just 28 years old is something you never think will really happen to people you know.

“I was, of course, devastated but to see how it affected Jay’s family was truly upsetting.”

In a shocking and sobering statistic, only 1 in 10 victims of cardiac arrest survive in the UK. However, the rate is 1 in 4 in Norway, where every school pupil is taught CPR.

“If we can help to save the life of one person, we’ll know that our input will have been worth it,” added Lee.

GM Insurance is committed to doing all they can to help Jay’s Aim, so do watch this space for more updates throughout the year.