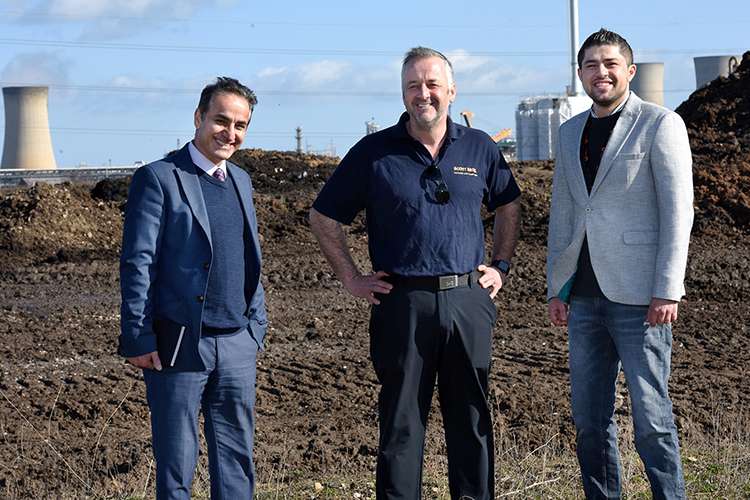 Postgraduate researcher Mardin Abdalqadir is working alongside the Stockton-on-Tees based firm on his PhD which is investigating how to sequester carbon in soil developed from waste products.

His doctorate hypothesises that by using a combination of natural clay, construction by-products and green waste, an artificial soil can be created which will help to remove the amount of carbon dioxide from the atmosphere.

The soil could then be used as landscaping in areas of high carbon dioxide, such as urban and industrial environments, and will remove the greenhouse gas from the atmosphere.

Peter Scott, a director of Scott Bros, said: “We are committed to boosting Teesside’s circular economy by supporting and discovering innovative ways of using recycled materials to create commercially viable products and solutions to reducing carbon emissions. We are pleased to be working with the University on this piece of cutting-edge research.”

“The idea of this research is to use natural clay materials to absorb carbon dioxide in a process called mineral carbonation.

“This ‘enhanced weathering’ is something that would naturally happen on a geological time scale, but we hope to substantially accelerate that process and, in doing so, increase the efficiency of carbon dioxide sequestration at relatively low costs.”

Mardin, who came to Teesside University from Iraq in 2019, added: “Over time, the artificial soil naturally sequesters carbon dioxide from the atmosphere.

“This research is looking at ways in which we can create a product from waste materials which accelerates that process.

“As well as reducing the amount of carbon dioxide in the atmosphere, it will also provide a useful habitat for vegetation which obviously has further environmental benefits.”

The first part of the research, which is being supervised by Dr Gomari, together with Dr Tannaz Park and Dr David Hughes.

Alongside this, the research team will undertake early-stage field research with Scott Bros using an area of land at its Haverton Hill site that will be covered by artificial soil for monitoring of carbon capture and storage over the next three years.

The research builds upon an ongoing partnership between Teesside University and Scott Bros which has seen the two organisations collaborate on a number of different projects.

These include developing an innovative new building material engineered from unwanted waste clay, known as filter cake, which is a by-product of construction and excavation waste. The company recently produced a prototype brick which is attracting interest from major housebuilding companies. To find out more about research at Teesside University click HERE

Photo (L-R): Dr Sina Rezaei-Gomari, Director of Studies, Peter Scott, a Director of Scott Bros, and Mardin Abdalqadir, post gradute researcher at one of the potential Scott Bros sites where the artificial soil will be trialed