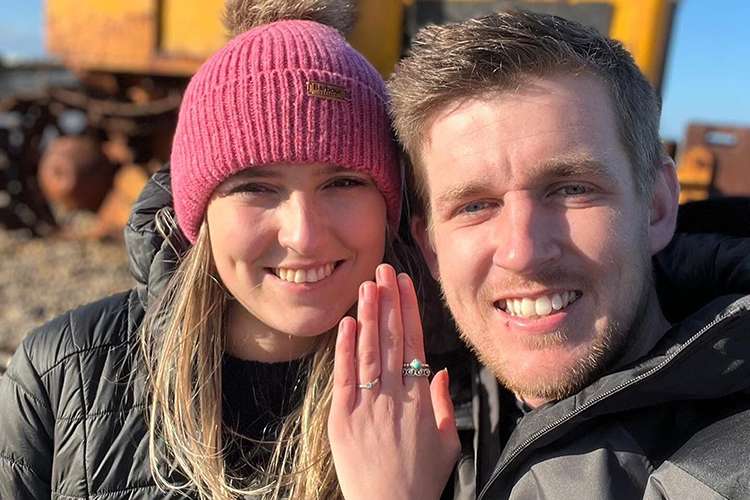 LOVE is in the air at a family-run Norfolk skip hire business after a couple who met at the yard announced their engagement on 22/2/2022.

Danny Walsh, 28, transport supervisor at Pips Skips, came up with a clever plan to get his girlfriend Alice Moore away from her desk in the accounts office so he could pop the question.

First, he roped in business director and friend James Hyde to back up his story that Alice, 24, was needed to accompany him on an unexpected journey to pick up a truck.

Once they were on their way, a spoof text arranged by Danny said the imaginary person they were to meet had been held up for an hour.

The ‘delay’ gave him the chance to suggest they drive to a favourite beach spot close by.

Once there, he dropped to one knee, produced a sparkling engagement ring, asked the big question and – to his relief – was told ‘yes!’

The delighted couple then returned to work to share their happy news with colleagues.

Alice said: “I didn’t have a clue what was going on. It was really romantic of him.

“We’d been talking about getting engaged but have been saving for a house, so we’d put it to the back of our minds. I’d seen something on TikTok, with someone talking about 22 February 2022 – all the twos – being a great date to get engaged. I was just joking around and sent it to Danny. Next thing, Danny and James had conned me into thinking I had to go on this trip for a truck!”

The plan almost unravelled at the beach when Danny waited until Alice had her back turned before bending down to pop the question.

“He was shouting my name to turn around but I couldn’t hear him. When I did eventually turn around, it took a moment to realise what was happening.”

Danny is a childhood friend of Pips Skips’ director James but was working for a different business when he first met Alice at the yard.

“Then he started working here and would come to accounts during his lunch break,” added Alice.

The couple’s romance flourished when Danny moved to a house close to where Alice was living.

“We became neighbours and we were also working together. Then the pandemic came along; it was nice weather and we ended up having barbecues outside and spending more time together.”

The couple have now set the date to marry in May 2025.

Alice added: “Everyone at work was so excited for us. It’s a really friendly place to work, everyone is really nice. We will be making sure we do something special when the time comes, so they can celebrate with us.”

Pips Skips was launched by Phil and Kerry Hyde over 25 years ago. Based in Dereham, Norfolk, the family-run business now includes siblings James and Georgia Hyde, who are also both directors. The business has a fleet of 25 lorries and over 1,500 skips.

To help the happy couple celebrate, Alice and Danny are sharing the honour of being this month’s Skip Chick and Skip Hunk. Click HERE to find out more about them!