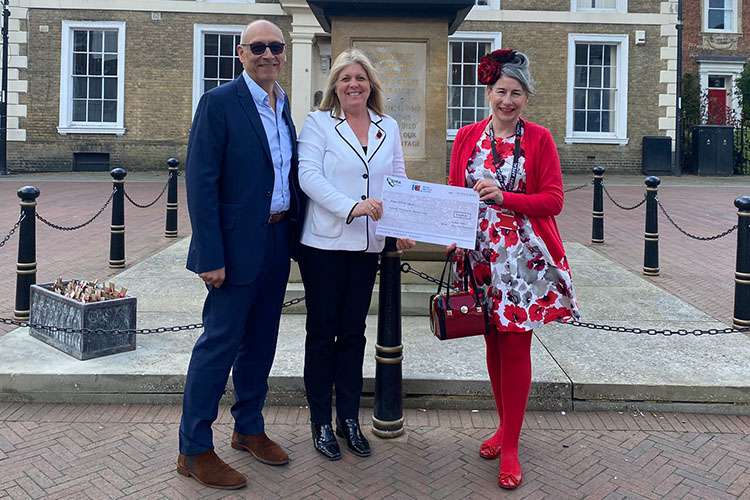 THE British Metals Recycling Association (BMRA), the trade association representing the £7 billion UK Metal Recycling sector, has donated £20,000 from the proceeds of a charity raffle and additional donations thanks to the support of its generous membership.

A time-honoured tradition of the Association, each year the standing President selects a charity that will receive a donation from monies raised from raffles and auctions held at BMRA events throughout the year. Due to the COVID-19 pandemic the BMRA held its first face to face event in two years, the Annual Dinner at the Royal Lancaster in London on 19 November 2021.

Susie Burrage, President of the BMRA said: “Our members are always incredibly generous with their donations, be it the donation of prizes or raffle entry. Last year they didn’t disappoint. I selected the Royal British Legion as 2021 was its centenary year. My maternal Grandfather, John Glover, a veteran of D-Day WW2, instilled in me from an early age to never forget those who have actively served to protect our country and to always wear a poppy with pride.

“We were delighted that some members gave additional donations, even giving their photography competition prizes to the chosen charity instead.”

Lucy Acred, Community Fundraiser Cambridgeshire & Huntingdon, Royal British Legion said: “We are overwhelmed with such a wonderfully kind donation from British Metals Recycling Association. Due to their generosity we can continue to provide support and care to the Armed Forces, veterans and their families in so many ways, such as information and advice on care and independent living, physical and mental wellbeing, and financial and employment support. We can continue to ensure that the Armed Forces Community can access the support they need.  Thank you so much to everyone at British Metals Recycling Association for their fundraising efforts throughout the year, their wonderful donation and their support to the Armed Forces Community.”

Ms Acred added: “We really need volunteers throughout Cambridgeshire and Huntingdon for the Poppy Appeal 2022, if you can gift some time to help with the collections in the supermarkets, can help deliver or collect poppies and collecting tins we would love to hear from you, there are so many ways in which you can help.”

The Royal British Legion, the country’s largest Armed Forces charity, with 180,000 members, 110,000 volunteers and a network of partners and charities; helping to give support wherever and whenever it’s needed. CLICK HERE for further information. To get involved in the Cambridgeshire and Huntingdon area contact Lucy Acred