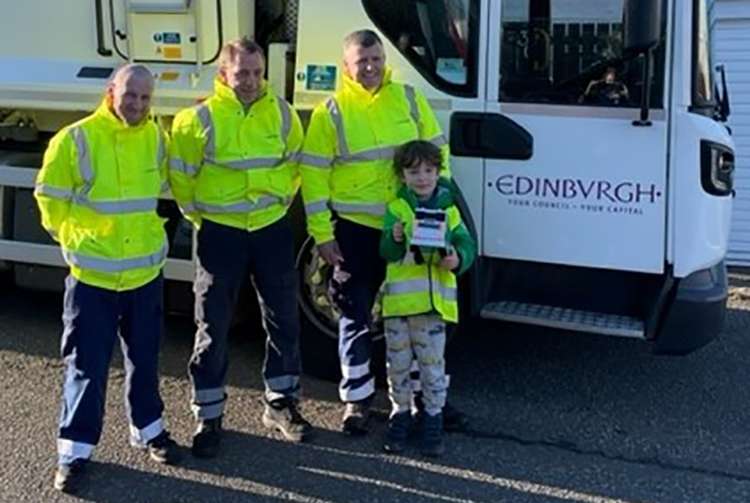 A CARING waste crew has made a little boy’s day after swinging by to give him his very own toy bin truck.

Young George Wallace loves watching the refuse collectors from the window of his home and makes a point of giving them a cheery wave as they go about their tasks.

Now, the City of Edinburgh Council team has clubbed together to buy the four-year-old a toy truck as a ‘thank you’ for giving them a boost while they worked through the pandemic restrictions.

Even better, they helped the youngster climb into their refuse truck, for a bin collector’s view from the driver’s seat.

The crew’s route passes by the youngster’s home in South Queensferry, in the shadow of the famous Forth bridges and just a few miles from the centre of the Scottish capital city.

When George’s mum, Rosalind Wallace, told the crew how much her son looks forward to their arrival, the team made a point of looking out for him and making sure they gave him a wave back.

Soon they all came to look forward to the heart-warming moment, particularly when Covid restrictions were at their peak and little George was at home.

Rosalind said: “It’s been so lovely to see George’s smile every week as he waves to the guys collecting our waste.

“I know it’s been a difficult time for them and I think they brightened each other’s day. George helps with our local litter picking group, Cleanferry, and so is very inspired by them.”

Cleanferry is a community group which carries out regular litter picks in the popular tourist town, tidies waste from the shoreline and provides attractive plant displays.

Crew driver Craig Grand said: “It was so lovely to meet George. His wee smile has been keeping us going in the last wee while and so we just had to buy him a present and the dumper truck seemed perfect.

“We’re all delighted he’s so pleased with it, and it was great to see George in his litter picking uniform. He’ll be working for us soon!”

Cllr Lesley Macinnes, Environment Convener, said the council’s waste crews across the city had been touched by the public’s support during the pandemic. She added that some had taken time to leave thank you cards and gifts.

“Our waste crews have been working round the clock in some very challenging circumstances since the start of pandemic.

“It’s really lovely to see in this case the little boy brightened their day so much the crew showed their gratitude by buying him the dumper truck.”