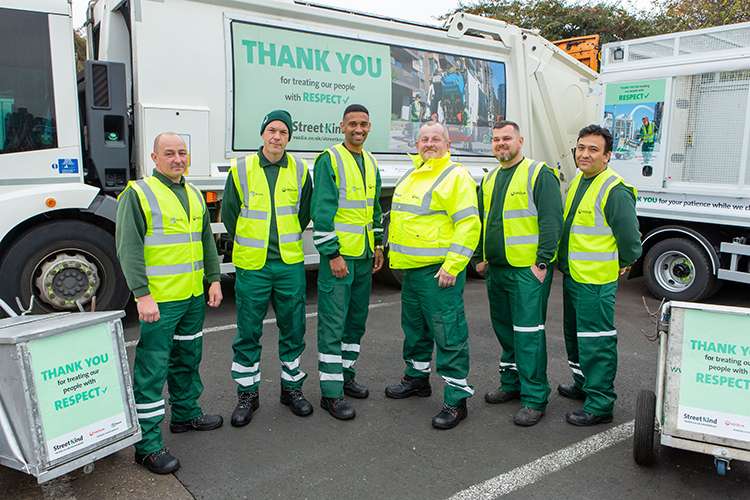 AFTER a year in which essential services and the key workers who provided them were celebrated, over half of public-facing staff have reported a rise in abuse. Veolia, the UK’s leading environmental solutions company, is taking a stand after reports from frontline staff more than doubled, with a 118% increase compared to the same period last year.

In response to a doubling of incidents, Veolia has launched StreetKind, a new campaign thanking residents who recognise the hard work of their teams and taking stronger action against those who abuse or endanger its staff. Whilst the majority of people are respectful and kind to frontline staff, a rise in the most serious cases of physical and verbal abuse has led to a new commitment from the company to pursue more prosecutions.

The campaign builds on previous initiatives within the company focusing on building a safe workplace and includes a comprehensive training programme to support staff to defuse situations, handle instances effectively and how and when to involve the police. Frustration at being stuck behind a collection vehicle or queues at recycling centres are not reasons to abuse key workers and the company is reaffirming its support to staff who are victims of abuse.

Beth Whittaker, Chief Human Resources Officer, Veolia UK & Ireland said: “I talk to our people on a regular basis and they are passionate about their work and their teams, but hearing their stories of abuse, especially in the last six months, has been increasingly distressing. No one should be abused simply for doing their job and we’re determined to combat this unacceptable trend.

“As well as appealing to the public to show their appreciation for our teams, we are also focusing on training and support for our employees to respond to incidents. We will take the most serious action for the most serious attacks, including prosecutions, in order to build a safer workplace environment for our colleagues.”

The campaign launches for its first phase across 20 local authority areas, including some of the worst affected areas in Hampshire, Essex and South London. StreetKind will thank residents for their patience and invite them to engage with their hard working teams. Veolia hopes to decrease the instances of abuse, but has pledges to staff that reports will be investigated and strong action taken when necessary. StreetKind will be localised to each area and will launch with the full support of the local councils and Veolia’s Executive Board.

ESA Health & Safety Policy Advisor, Stephen Freeland, said: “Data from an ongoing survey of our members suggests that there was a significant and concerning spike in the reported number of incidents of violence and aggression towards operatives over the first two quarters of 2021 – with a ten-fold increase compared with previous annual numbers.

“The majority of these incidents are verbal abuse, but over the longer term, this can be just as damaging as physical abuse and must be stopped. Clearly no one delivering an essential service to society should be subjected to abuse of any kind and these incidents don’t just affect individuals, but may also lead to high staff turnover for organisations and have a negative effect on organisational culture.

“We will continue to monitor the situation closely and will work with our members and other partners in 2022 to further tackle this issue.”

One response to “Veolia launches StreetKind campaign to protect its teams”