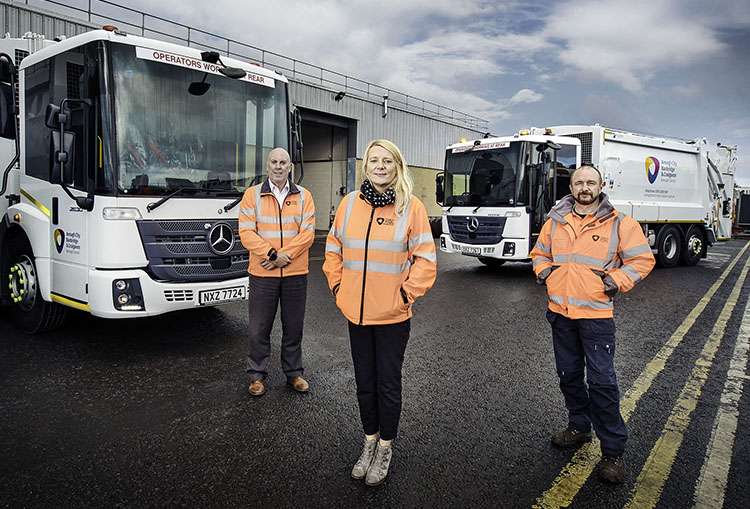 Refuse collections are ‘as easy as ABC’

IMPRESSIVE reliability combined with positive feedback from crews and customer-focused parts back-up all help to explain why waste and recycling managers at Armagh City, Banbridge and Craigavon Borough Council are delighted to be running another six Mercedes-Benz refuse collection vehicles.

The 26-tonne Econics were supplied by MBNI Truck & Van of Newtownabbey. It worked closely on the successful tender with primary contractor Castlereagh Motors, which represents specialist bodybuilder Farid Hillend Engineering in Northern Ireland.

Armagh City, Banbridge and Craigavon Borough Council – or ABC Council as it is commonly known – was established in 2015 and is Northern Ireland’s second largest local authority by population and economic activity.

Its latest 6×2 Econics have rear steer axles for enhanced manoeuvrability on residential streets. As 2630 L variants they are powered by 7.7-litre in-line six-cylinder engines that produce 220 kW (299 hp) and are paired with six-speed automatic Allison gearboxes. Their Powertrak compaction bodies, meanwhile, have 21m3 capacities and are fitted with Zoeller Delta high level bin lifts.

The trucks’ introduction coincided with the launch of a new service for the residents of Armagh. Collections of recyclables in kerbside boxes and food caddies were previously outsourced to an external supplier. This arrangement had been in place for nearly 20 years, but came to an end in November following a public consultation that saw 85% of respondents opt for the wheeled bins already used in other areas.

Waste Development Manager Lisa Doherty explained: “We’ve effectively harmonised the system by bringing the Armagh collections in-house. The result is a single, standardised, council-managed service, with the efficiencies this implies, for all residents across the borough.”