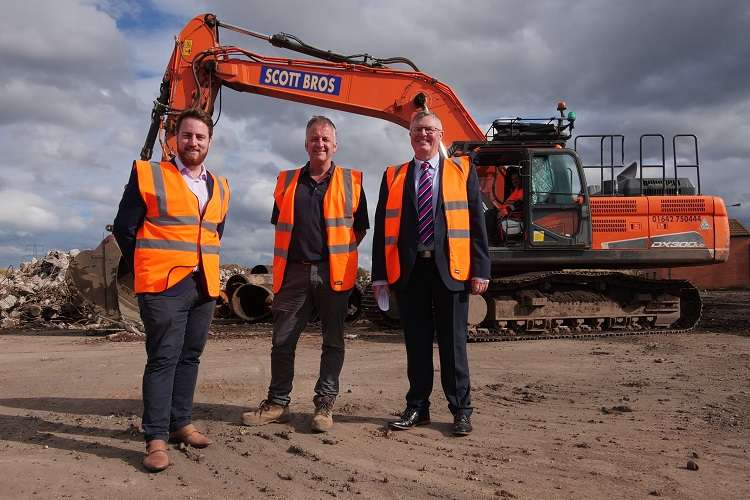 SCOTT BROS is investing more than £4 million in the country’s largest ‘urban quarry’ – allowing it to convert more construction and excavation waste into sustainably-produced sand and aggregate.

Its current wash plant handles up to 50 tons of inert material per hour, while the new plant will be capable of processing a further 200 tons per hour at the new site off John Boyle Road in South Bank, Middlesbrough – next to the Teesworks industrial zone.

The development is expected to create at least seven jobs and secures the future of a further 54 of its 120-strong workforce.

Jacob Young, Conservative MP for Redcar, who visited the site to get an overview of the project, said: “Teesside is on track to becoming the very centre of the Green Industrial Revolution seeing new, green technologies coming to our region.

“It’s all part of creating a circular economy here on Teesside, using soil washing facilities like this to convert construction and excavation waste into high quality commercial grade sand and aggregate which can then go on to be used in industry.

“As a Government we have set a target of Net Zero 2050 for carbon emissions and projects like this new plant are important steps towards achieving that goal.

“On top of all that, this £4 million facility will help create new jobs as well as seeing investment right here in South Bank in the communities that desperately need it.”

Work has already begun to prepare the ground and, as part of its plans, Scott Bros will restore the site by removing and recycling decades worth of demolished concrete, rubble and metalwork left over from previous industry.

The additional funding allowed it to upgrade its plans and invest in developing what will be England’s largest wash plant, to produce high-quality course and fine sand, as well as five different grades of aggregate. It is hoped that it will be fully operational by July next year.

The firm has already created five new jobs and extended the operating hours at its original £1 million wash plant, at Norton Bottoms, near Stockton, following an upswing in home improvement and commercial construction projects.

Peter Scott, a director of Scott Bros, said: “We are experiencing huge demand for our recycled sand and aggregate. Normally we can build up a stockpile, but it is being loaded onto the trucks and going straight out to customers as quickly as we can process it.”

Fellow director Bob Borthwick added: “We have tripled our original investment to ensure Scott Bros is able to reuse and recycle as much material as possible by designing out waste and creating sustainable solutions.”

Tees Valley Mayor Ben Houchen said that the £708,000 grant funding awarded by the TVCA was an investment in the area’s growing green economy.

He added: “Projects such as these represent the Tees Valley’s ongoing transition to a creating a low carbon economy as it leads the way in creating more sustainable ways to live and work.”

Mike Bibby, business development manager of CDE, which designed and manufactured the wash plant, said: “This plant will be the first CDE solution of its kind in the region. With its capability in handling tough material, the patented technology in this modular solution will assist Scott Bros to maximise product yield from their feed material as well as guaranteeing a lifetime of superior performance. We are excited to be partnering with Scott Bros to drive towards a more sustainable future.”

James Dale, a partner at Anderson Barrowcliff, said: “We were delighted to advise and support a fellow Teesside business to access and secure the TCVA grant, which made such a difference to Scott Bros’ significant investment in this green and sustainable technology.”