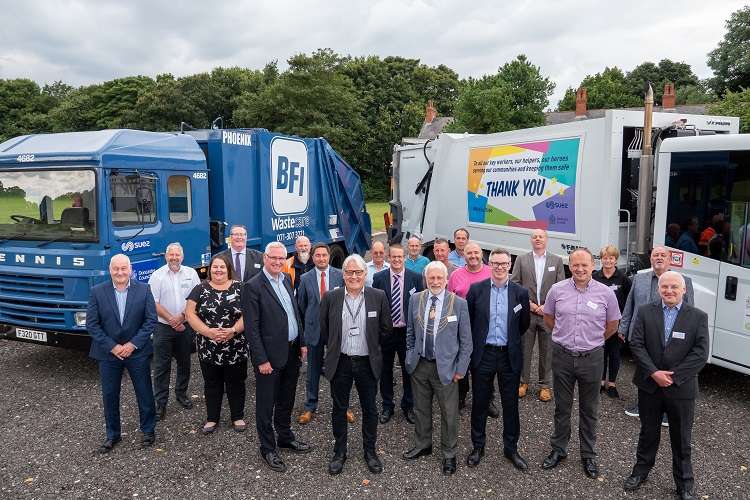 SUEZ recycling and recovery UK’s Chief Executive Officer John Scanlon has returned to the contract he started his career working on to celebrate its 30th anniversary.

The original contract between SUEZ (then Sitaclean) and Doncaster Council began in 1991 and saw SUEZ collecting and landfilling residual waste from metal bins presented at the kerbside. Now, thirty years later, SUEZ continues to serve the residents of Doncaster, collecting residual waste alongside over 45,000 tonnes of recyclate (card, paper, glass, metal, plastic bottles, and organics).

To mark the contract’s 30th anniversary, SUEZ CEO, John Scanlon, returned to Doncaster to celebrate the landmark occasion with colleagues and representatives of Doncaster Council. John said: “This is the contract I cut my teeth on when I first started at SUEZ 30 years ago, so today is particularly poignant for me personally.”

“The contract has evolved so much in its thirty-year history. In 1991, the vast majority of waste was sent to landfill and now, we recycle a huge range of materials from the kerbside.

John added: “We pride ourselves on being part of the Doncaster community. We have created over 180 local jobs and in 2019 we set up the Doncaster Environment Fund, awarding thousands of pounds to local good causes.”

John Scanlon began working on the contract with Doncaster Council as soon as it was signed in 1991, creating and working on new collection routes.

The contract between SUEZ and Doncaster Council has been renewed four times, most recently in 2018 when a new blue recycling bin was introduced to collect plastic bottles, paper, cans and card, with glass, and small electrical items also being collected from the kerbside.

Damian Allen, Chief Executive of Doncaster Council, said: “We work hard to ensure that Doncaster is as green and sustainable as it possibly can be, and the partnership between SUEZ and the council is integral in achieving that. In recent months, SUEZ and Doncaster Council have worked closely together to overcome the challenges of the pandemic and to provide the best possible service for local residents.”