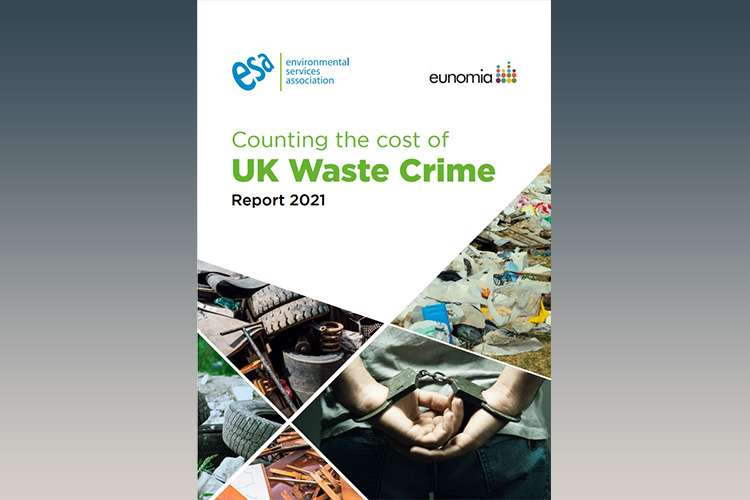 THE total annual cost of waste-related crime in England has increased by fifty-three per cent in just three years and now costs the country nearly a billion pounds a year, according to a recent study.

A new report published today by the Environmental Services Association (ESA) shows that the cost of waste-related crime in England has grown exponentially, with costs rising from £604 million in 2015 to more than £924 million in 2018/19. When the available data for England is scaled and applied to Scotland, Wales and Northern Ireland too, the estimated cost to the UK rises well above a billion pounds.

The research report, Counting the cost of waste crime, reveals that the two most costly forms of waste crime to England’s economy are fly-tipping, which now exceeds £392 million (rising from £209 million in 2015) and the operation of illegal waste sites, which account for an estimated £236 million (up from £98 million in 2015).

The independent research, undertaken for the ESA by Eunomia Research & Consulting, shows that these costs have risen due to a range of factors, including an increase in the number of recorded waste crime incidents taking place across the country. Types of waste crime range from fly-tipping, illegal dumping and uncontrolled burning of rubbish, through to major export fraud and tax evasion.

Alongside the report, a recent national poll undertaken by YouGov for the ESA suggests the majority of British residents surveyed are unknowingly leaving themselves open to enforcement action through a lack of awareness of their legal duty of care for the safe disposal of their waste. This may result in a failure to undertake legal requirements when arranging for waste to be collected and disposed of by third parties other than their local council.

The YouGov poll found that fewer than half (46% or 947 respondents) of those surveyed knew what their legal responsibilities were for the proper disposal of their waste and 70% (1,430 respondents ) were not aware they could be personally prosecuted if they failed to make the required checks and their waste ended up being fly tipped by a third party.

The YouGov results signal the need for consumers and businesses to become more aware of their legal duty of care when employing companies or traders to take away their waste – with nearly two thirds (65% or 1,335 respondents) admitting to not knowing how to check that the people collecting their waste were legally authorised to do so. However, the ESA believes that raising awareness of the need for consumers to check waste carriers’ registrations is only half the battle, since low barriers to entry mean that a proper registration is currently no guarantee that the carrier will manage waste legally.

According to Eunomia’s research, the costs to the economy associated with fly-tipping alone increased by £183 million between 2015 and 2018/19 – largely driven by an increase in the total number of incidents, coupled with increasing costs of clean-up.

The ESA and Eunomia have published two previous waste crime studies, one in 2014 Waste Crime: Tackling Britain’s Dirty Secret, and one in 2017 Rethinking Waste Crime.

Gavin Graveson, Chair of the ESA, said: “Waste criminals are exploiting a lack of public awareness and lack of regulatory oversight in this area, which has led to an increase in fly-tipping and illegal waste sites that contribute significantly to the overall £924 million cost of waste crime in England identified in our report today.

“Successive ESA reports over the past eight years have highlighted the shocking extent of waste crime in the UK and its cost to both the environment and economy. This latest report exposes the unfortunate truth that, despite additional regulatory focus in recent years, the scale of waste crime has significantly worsened.

“Although understandably delayed by the pandemic, it is now vital that the Government proceeds at pace with long promised reforms of the regulatory regime and we must make it much harder for criminals to operate in the recycling and waste sector.”

Sam Taylor, Principal Consultant at Eunomia, said: “Waste crime is a blight on our neighbourhoods and environment. Our research has shown a worrying trend in increasing costs of waste crime when the Government is working hard to  promote resource efficiency and move towards a more circular economy in England. It’s absolutely vital that waste crime is monitored accurately and the waste sector is supported by a robust regulatory regime.”

Waste crime remains on the rise despite several recent initiatives to tackle it, including the Serious Organised Waste Crime Review; the establishment of the Joint Unit for Waste Crime (JUWC); increased Environment Agency enforcement funding, and wider policy reforms. The ESA believes further initiatives are needed to: