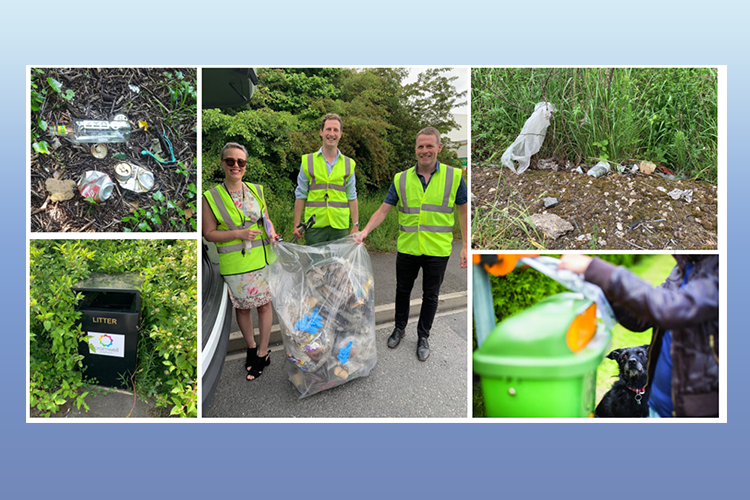 CROMWELL Polythene, which supplies products for the capture and containment of materials for recycling is passionate about reducing waste. As part of this commitment, it recently held a litter picking activity and is also conducting research into dog waste specifically.

The results from their voluntary clean-up, during June, to support The Great British Spring Clean 2021, indicate a sharp jump in discarded glass bottles and tin cans. The activity also saw a significant increase in PPE compared to their previous litter pick undertaken in September 2020, for Keep Britain Tidy’s Great British September Clean.

Cromwell and its manufacturing and recycling division, CPR Manufacturing, found higher levels of fly-tipping in rural and woodland areas, including old chairs, broom handles and computer parts. In contrast, industrial and residential areas were a hot spot for cigarette butts, food packaging, bottles and cans. Heartbreakingly, litter was also recovered in an area where bins were clearly available.

The family-run business, which supplies a range of polythene products to aid recycling, undertook five clear ups on behalf of the annual Keep Britain Tidy campaign. It was a team effort, undertaken around Sherburn in Elmet, where Cromwell Polythene is based, their CPR Manufacturing site based in Alfreton, and by team members working from home.

More than 700 items of litter were collected, in 15 bags weighing almost 15kg. All types of material were found including aluminium cans, cotton, face masks, gloves, tissue and wet wipes, glass, paper, and plastic. Amongst the more unusual items found were a headless toy pirate, two parts of a computer tower, an old coat, a lock and key, and a pet collar.

James Lee, managing director of Cromwell Polythene, said: “People are quick to point the finger at plastic pollution, but our findings indicate multiple material types are being discarded. None of these materials are to blame – instead, we need to change behaviour to improve the environment on everybody’s doorstep.”

Cromwell Polythene is also currently conducting research about dog waste. Results to date show that 90 per cent of respondents encounter dog waste that hasn’t been disposed of, with 60 per cent of these stating they see lots of it. 60 per cent think this is due to laziness or vandalism.

The reasons for littering can be complex, from deliberate dropping of items, to material inadvertently being blown away from overflowing bins. It can also result from misconceptions about what is the right thing to do. For example, when asked why dog waste bags are tied to trees, nearly 10 per cent thought that people expect the bag and its content to biodegrade. Even if a bag biodegrades, the dog waste will still be there, so it’s important to use an appropriate bin rather than discard them on the ground or in trees. Dog waste that is not disposed of properly can leach into water sources, releasing harmful compounds and can contaminate soil with harmful bacteria and parasites.