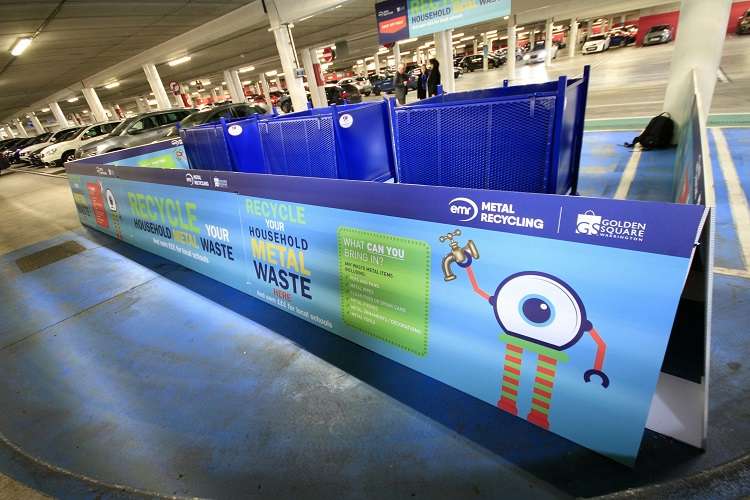 A COMMUNITY recycling initiative in Warrington, led by Golden Square Shopping Centre and world-leading recycler EMR, has been recognised by the prestigious Green Apple Awards.

Throughout 2020, Warrington-based EMR encouraged the local community to recycle unwanted household items, with proceeds from the resulting waste metal being donated to a local school. Visitors to Warrington’s Golden Square Shopping Centre could use one of three metal collection bins in the site’s car park to drop off common waste metal items including garden tools, pots and pans, copper piping, food and drinks cans, and radiators.

Local schools were then able to register to enter into a draw to win the value of the metal collected. The winning school, Penketh Primary School, received £2,400 after the collected metal raised £800 and was matched funded by both EMR and Golden Square Shopping Centre.

Rebecca Kayll, Head Teacher at Penketh Primary School, described the donation as “invaluable” at a time when most fundraising opportunities had been cancelled due to the COVID-19 pandemic.

Kayll said: “The Eco Team and our School Council will decide how the money will be spent to improve our eco-credentials, with one pupil stating an aim to make the school carbon neutral!”

The award-winning scheme was developed in response to the ‘Waste to Wealth Initiative’ by Business in the Community, The Prince’s Responsible Business Network. EMR and JLL, Golden Square Shopping Centre landowners, are two of seven Waste to Wealth Champions, committed to identifying challenges and developing innovative solutions to avoid catastrophic climate change and restore the health of our environment.

Reacting to the award announcement, EMR’s Managing Director of Metal Recycling Ian Sheppard said: “At EMR we care a great deal about the communities in which we operate and protecting the environment for future generations, so it is an honour to be recognised for our commitment to both at this year’s Green Apple Awards. We will continue to strive towards achieving the carbon neutral standards we’ve committed to in ‘Our Decade of Action’, as well as educating younger generations on the importance of metal recycling.”