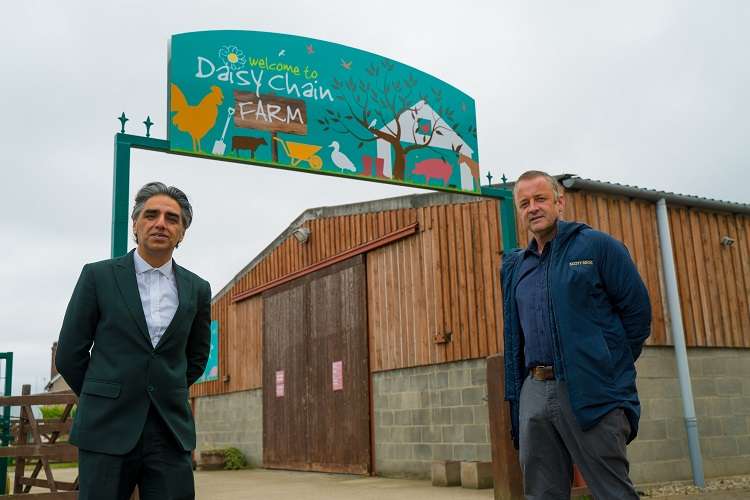 FAMILY-run firm Scott Bros has made a rather unusual donation to autism support charity Daisy Chain – several skips and a load of topsoil!

It provided its skip service free of charge to help the Teesside-based charity prepare to reopen its superstore on Portrack Lane, Stockton, earlier this month.

Scott Bros then found out the charity had a heap of problems at its Calf Fallow Farm in Norton, following a build-up of animal manure during the lockdown period.

So, the Stockton-based company sent a skip lorry to collect the waste, which will be composted and used to enrich topsoil sourced from construction sites across the North East.

The farm is not only a popular attraction for youngsters and adults with autism, it also provides an opportunity to work with the animals, gain qualifications and learn such valuable life skills as growing fruit and vegetables.

To further support the charity’s work, Scott Bros will also supply a load of topsoil for its new polytunnel as well as railway sleepers to create bays where manure can be stored before being used on its allotments.

Daisy Chain’s chief executive, Neeraj Sharma, said the charity relies on the generosity of public donations and income generated by its charity superstore, which reopened on 2 June.

After the Government eased restrictions surrounding the retail sector, it had to ensure the store was able to operate while keeping its staff, volunteers and the public safe by maintaining social distancing.

The guidelines meant it had to create extra space to create a quarantine area where items can be stored for 72 hours before they are handled. As a result, some donated items that were damaged or unsuitable for resale were removed by Scott Bros for recycling.

As part of the measures, no more than 40 people are allowed inside the superstore at any time, staff are wearing PPE, the aisles have been rearranged, while all hard surfaces are regularly cleaned. The changing rooms remain closed and there is no opportunity to try clothing on.

Neeraj said: “Daisy Chain has been deprived of a major revenue stream that allows it to continue supporting children and adults with autism, as well as their families.

“We’ve received some amazing donations in the past, from expensive designer clothing to a grand piano, but we were really pleased to accept Scott Bros’ offer of a skip service – which saved us time and money that we could ill-afford.”

Peter Scott, a director of Scott Bros, said: “Daisy Chain is an integral part of the Teesside community and does such fantastic work, so we were happy to give something back in these difficult times by helping the charity reopen its superstore and support its farm project that provides children with such a unique learning opportunities.”

Daisy Chain estimates it has lost £400,000 income due to the closure of the superstore and cancelled fundraising activities. It has launched a public appeal to allow it to continue to fund its vital services.