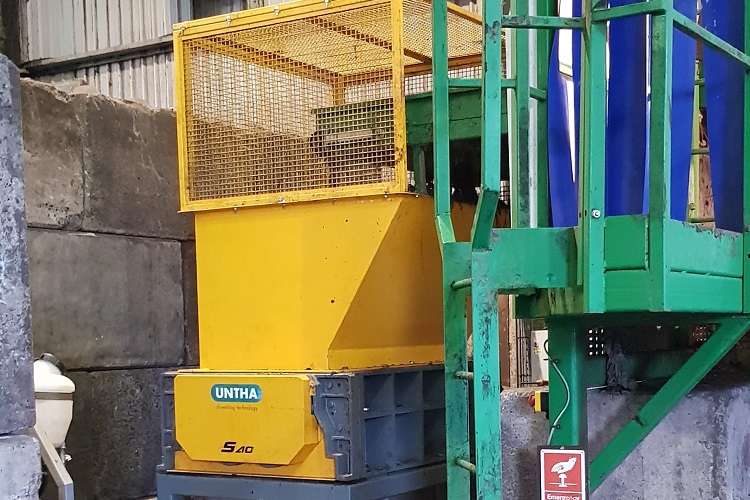 TOTAL waste management specialist Levenseat Ltd has installed a new UNTHA S40 shredder as the Lanark-based business gears up to process 42,000 tonnes of garden and food waste mix, over the coming year.

The eco-conscious organisation – headquartered in Forth, Lanark – was already equipped to handle an array of waste streams including MSW, bulky transfer station waste, street sweepings and gully cleanings, to name just a few.

Typically tackling 15 tonnes of materials per hour, the compact S40 shreds and guarantees a particle no greater than 90mm in any one plane which is critical for animal by product regulations. The output material is then sent for further processing to extract the liquid and soft organic material which is used as an AD plant feedstock with the fibrous fraction being treated in vertical composting units.

“This is our second UNTHA shredder and we’re already considering a third investment,” commented Kenny Lang, organics manager at Levenseat.

“The compact machine originally attracted our attention due to its ability to integrate seamlessly into Levenseat’s height-restricted building. But it has gone on to satisfy our exacting specification entirely, proving to be a critical control point for the sizing of our end product.

“UNTHA’s customer support services have also stood out as much as the technology itself.”

Now fully commissioned, there are great expectations for the operation in the coming months, Kenny added.

“The processing of green waste is greatly influenced by the seasons,” he said. “Volumes go through the roof when the sun starts to shine, so we’re excited to see exactly how the S40 can perform.”

Established in 1986 by its owners, Matthew Hamilton and Peter MacLaren, Levenseat secured council permission last year to increase capacity to 750,000 tonnes of waste per year. The recycling and resource management firm also has a 12.3MWe on-site EfW plant which exports electricity to the grid.