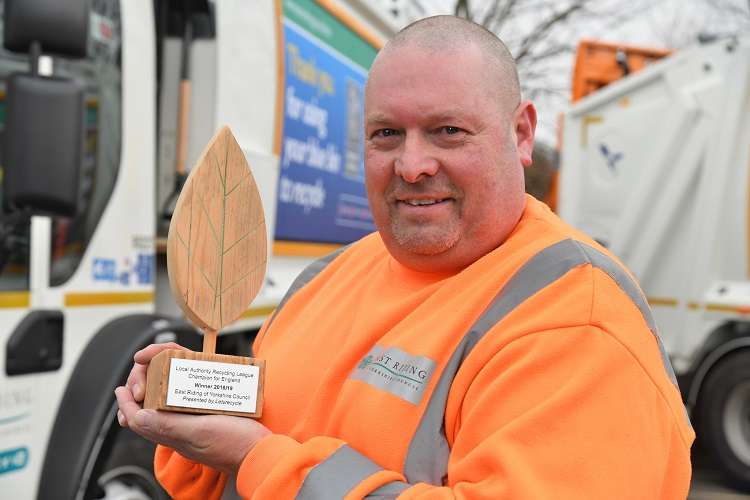 EAST Riding of Yorkshire Council has been recognised for topping the Recycling League of England’s local authorities with a recycling rate of 64.8% for 2018/19.

In the wake of figures published by the government in December, the authority was last week (10 February 2020) officially presented with the trophy for ‘Local Authority Recycling League Champion for England’.

The council’s success has been praised by Environment Minister, Rebecca Pow, whose remit covers environmental issues including waste and recycling.

Mrs Pow said: “Hearty congratulations to East Riding of Yorkshire Council. Local authorities play a vital role in ensuring we can all recycle more to create a cleaner, greener environment.

“Increasing recycling rates and creating a more circular economy lies at the heart of our future plans for managing our resources and waste. Our landmark Environment Bill will help make this vision a reality, introducing a suite of new powers including to create a consistent set of materials which all councils in England will collect from people’s homes – whether you live in East Riding or Eastbourne.”

At an event held at East Riding of Yorkshire Council’s depot in Willerby, the council’s Leader Councillor Richard Burton received what is the inaugural trophy for the top recycling council.

Councillor Burton said: “I’m extremely proud to accept this award on behalf of our waste and recycling team, our dedicated bin crews and the residents of the East Riding.

“Our residents are a hugely important part of our team. Without their continuing support for all our recycling schemes we wouldn’t be able to recycle as much as we do.

“As a council our aim is to improve our services for our residents as well as improve our recycling performance.”

The award was presented by Steve Eminton, editor of letsrecycle.com, which records local authority recycling rates.

Mr Eminton said: “We are delighted to present the trophy to East Riding of Yorkshire Council. Against a challenging background for recycling with volatile commodity markets and pressures on council budgets for communications, the council has done really well.

“64.8% is a phenomenal achievement, some 20% higher than the average for English local authorities.”

“I know other local authorities are keen to follow in the success of East Riding of Yorkshire Council and learn some of the reasons for their success – they would find that the council’s waste and recycling team and bin crews have all played their part. But with the support of councillors, it is residents too who have also been fantastic in helping to get the rate to such a high level. and it’s great to hear from the council how much enthusiasm and support recycling has in the area.”

The wooden leaf trophy was made by the Community Wood Recycling charity from waste wood reclaimed from construction sites.