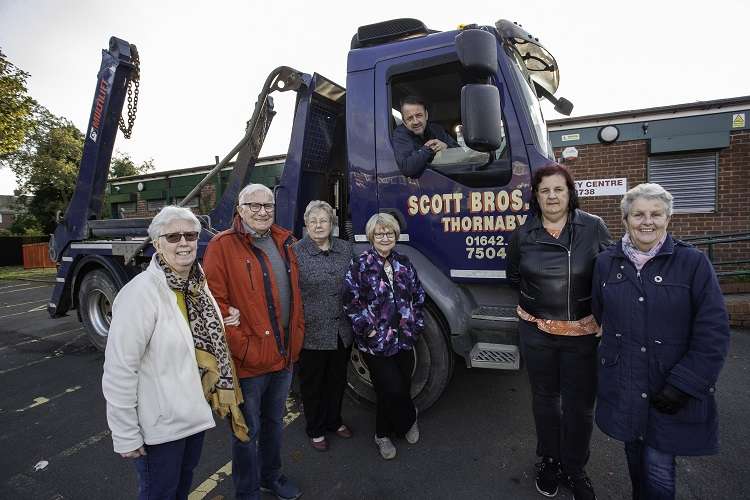 SKIP hire specialist Scott Bros. has come to the aid of a community centre overwhelmed by thick undergrowth.

The volunteers who run Marton Community Centre in Middlesbrough called the family-run firm for help to remove a mass of bushes and shrubs which had grown up to form an impenetrable barrier around part of the building.

The undergrowth was so thick that its removal even revealed original paintwork on a drainpipe previously hidden from view.

Recently the committee agreed to replace the centre’s external doors, but workmen faced an impossible task when it came to fitting new energy-efficient windows.

The volunteers are responsible for all repairs and maintenance of the community centre, which is a registered charity, through a mix of rental income, fundraising and donations.

They set about pruning back the bushes and shrubs and were joined by staff and apprentices from charity Middlesbrough Environment City, together with pupils from Beverly School, Middlesbrough, a specialist school for children and young people with autism.

Stockton-based Scott Bros. provided a skip free-of-charge and afterwards took the mountain of green waste away for recycling.

Middlesbrough councillor and chairman of the centre, Tom Mawston, said: “The plants and bushes were put in about 16 years ago and since then have grown at quite a pace. It was quite a jungle.

“We needed them cutting back to allow access so the windows can be replaced. This uncovered parts of the centre unseen in years – including the original paintwork on a drainpipe!

“There was so much material that we easily filled the skip, in fact some of the apprentices had to jump up and down to compact the bushes, otherwise we might have needed a second skip.

“I’d like to thank everyone involved in this project, including Middlesbrough Environment City, Beverly School and Scott Bros. – for helping make such a huge difference to this popular facility.

Peter Scott, a Director of Scott Bros., said: “As a family-run firm we are dedicated to supporting deserving initiatives such as Marton Community Centre and those volunteers who are committed to making it such a success.”