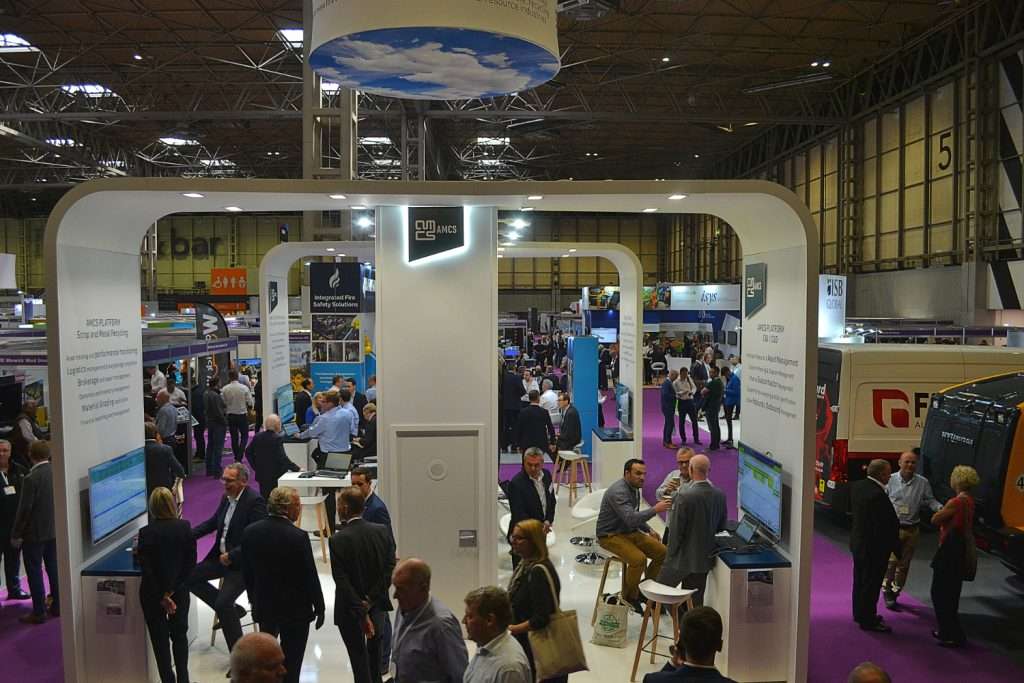 FOR a lot of seasoned veterans in the waste and recycling sector, RWM has been the defining annual industry event for many years now. The busy summer season is made more so by plans to visit – or exhibit – the NEC in Birmingham in September.

But with new exhibitions on the scene, new management taking over in 2018 and economic uncertainties an ever-growing weight around our necks, many wondered if RWM’s organisers could still pull off a show that lived up to its impressive reputation.

With over 500 exhibitors to see, the show can clearly still pull in some big industry names, including Buntings, CIWM, Johnston Sweepers, and Romaquip. The show floor was dotted with eye-catching and impressive additions, including an elephant made out of batteries and a van decorated with heartfelt messages to lost loved ones, courtesy of How’s My Driving?

Equally as impressive was the line-up of speakers who kept visitors informed at each of the 13 seminar theatres. Headlining these (and impossible to miss from RWM’s lead-up marketing campaign) was Jeremy Paxman, patron of Clean up Britain; Dr Anne Meier, chemical engineer and principal investigator at NASA, and Tom Szaky, CEO and founder of TerraCycle, who all drew huge crowds.

Acting as a forum to give influential speakers a voice and ready audience is a huge part of any industry’s flagship exhibition, and one that RWM’s organisers clearly took seriously. However, they would have done well to have taken a leaf out of the book of other show organisers and made use of smart headphones so speakers did not disturb the exhibitors around them.

The event was a bustling hubbub of activity across both of the two days (11 and 12 September), especially the first, and few would have denied that the show was a success.

However, others noted the continuing shift away from being a machinery and vehicle-led show to a more service-led one, as shell-scheme stands dominated where once big machinery would have stood.

“The show is busy and I think it’s better laid out than it was a year ago – the zones are laid out more logically,” said strategic consultant Adrian Graves. “I can’t say this is not a successful show but it’s a services show; it’s a high concentration of small, shell-schemed stands selling services, not equipment.

“It’s our first visit so we were open minded,” said Perry Buckley, business development director at Continental Tyre Group. “It’s been a good show and well organised. I’ve walked round and spoken to people and they love it here. I can’t say I’ve not liked it, but it doesn’t seem to quite fit the crowd that we are here for.”

Nevertheless, even with the focus squarely on services, RWM was still a lively and well run-event, delivering value for visitors and exhibitors alike. “It’s been a really engaging and diverse crowd,” said Tom Foottit from How’s My Driving? “That’s the difference with RWM; we’ve had everyone from students to retired people, and they have relaxed with us and allowed us to tell them about our story.

“Footfall has been great. I’ve met a lot of influencers and stakeholders as well.”

Preparations for RWM 2020 are already underway. The dates have been confirmed as Wednesday 16 and Thursday 17 September 2020, again at the NEC in Birmingham.

Find out more at www.rwmexhibition.com

“RWM gave us the platform to show visitors what we do and our stand stood out because we featured production-sized operating equipment. We believe that it is vitally important that equipment suppliers exhibit their technology at exhibitions.

“There is a great deal of work to do.  RWM has given us the opportunity to help recycling companies solve their metal separation problems and we look forward to the show in 2020!”

“The show was a great steppingstone into the recycling industry. Exhibiting at the RWM gave us a chance to connect with some new clients, catch up with existing clients and introduce ourselves to some industry leaders. Everyone was very welcoming, and the staff were always helpful. It was an exciting and successful couple of days, and we look forward to visiting again next year!”

“There was a real buzz in the air, and a great atmosphere around our stand, we were extremely busy constantly giving out literature and chatting to people visiting our stand.

“We were also able to show case our new promotional ‘Recycling PVC’ video which demonstrates our new technology plant that can tolerate contaminated loads, primarily glass. We had some great interest and great comments from visitors to our stand.

“We are really looking forward to exhibiting at the event next year.”

“We had a belter of a show this year. A new product launch is always exciting and the RWM was exactly the right place to do that.

“We met hundreds of great people at the show who we are excited to work with and although we’d exhibited at the RWM previously, this one had the most positive vibe to it. We’ve already booked for next year.

“My only criticism would be that it should go back to a three-day format; there was so much to cram into two!”

“We’ve had an incredibly busy two days which has been fantastic. The event is attended by a lot of our members so it has been a really good opportunity for us to meet our members in person. A lot of us are office bound so it’s great to have this opportunity to come out and this event annually is a real mark in our diary.

“It’s such a pivotal event for us that we time our communications with it in mind. For example, if there is a particular thing that we want to launch we will consider doing so either during or just before the event so we can talk to our members about them here.”