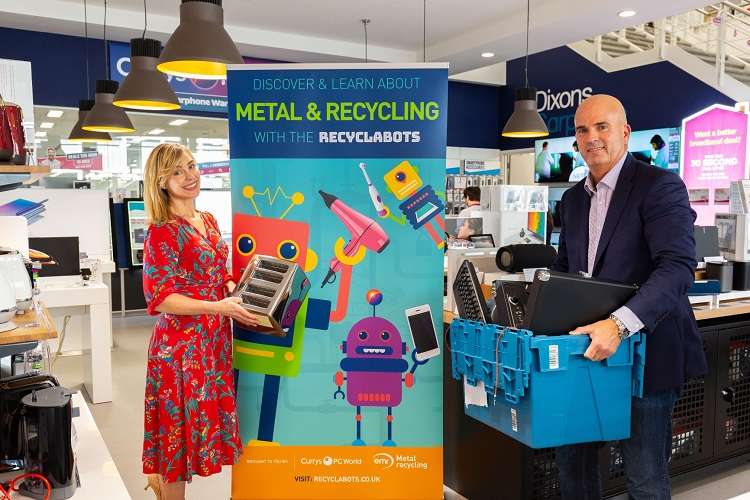 ‘Recyclabots’, a free schools education programme aimed at Key Stage 2, has been launched to help schools and children to learn about metals and recycling. It teaches children about recycling, why it is necessary and how it benefits the planet, whilst rewarding schools with Currys PC World vouchers for recycling old tech and metal waste through the programme.

Kesah Trowell, Head of Sustainable Business at Currys PC World, said: “We want to inspire children to make positive environmental changes by recycling metal and old or unused tech, such as phones, hair dryers and household waste metal. With our ‘Recyclabots’ schools programme, children can learn about the importance of metals and the programme will inform a generation who we hope will make recycling a natural part of their everyday life.”

The growing, unseen shortage of ‘rare earth elements’ contained in electronic devices was highlighted in a recent study by the Royal Society of Chemistry, that estimated that as many as 40 million unused gadgets are going to waste in UK homes. Devices contain valuable and increasingly rare elements such as the metal indium. Scientists estimate that sources of these rare metals could run out within a century, meanwhile our demand for new technology continues to increase.

EMR UK Chief Executive, Andrew Brady, said: “The more metal we recycle, the less ore and virgin materials we need to take from the ground in the race to meet consumers’ needs. It’s important to consider the impact of waste for future generations.

“As a world leading metal recycler, we know a thing or two about the world of metal and the science that comes with it. We are passionate about passing our knowledge on the importance of recycling to future generations and proud to launch ‘Recyclabots’ in partnership with Currys PC World.”

Currys PC World is part of Dixons Carphone, who are the biggest collector and recycler of electrical waste in UK Retail, with over half (51%) of the industry’s electrical waste passing through their huge network of stores and delivery network.

The ‘Recyclabots’ scheme has been developed in response directly to The Prince’s Responsible Business Network, Waste to Wealth Initiative – launched by Business in the Community. In November last year, EMR was announced as one of seven Waste to Wealth Champions committed to identifying challenges and developing innovative solutions to avoid catastrophic climate change and restore the health of our environment.