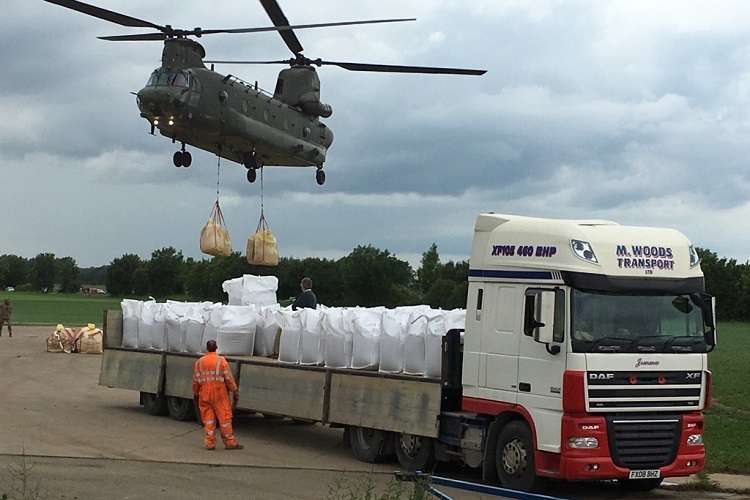 AGGREGATE Industries’ Woodhall Spa quarry in Lincolnshire has been working tirelessly to reduce the impact of floods on nearby communities.

Earlier in June, two months’ worth of rain poured across Lincolnshire in just two days. As a result, many communities across the county faced the very real threat of flooding.

Between 11 and 13 June, Woodhall Spa quarry provided Kirkby-on-Bain with 450 25kg sand bags used to barricade roads and divert rising water into fishing lakes and rivers, as well as lining doors to protect houses and preventing water entering the cellar of the local pub.

Then, at 3:30pm on 13 June, Woodhall Spa quarry received a call from Lincolnshire Police requesting flood aid in Wainfleet where residents have been evacuated. By 5pm, 68 one tonne bags of ballast had been prepared and sent out on two flatbed trailers where they were unloaded with a Chinook helicopter and placed into the breaches of the River Steeping which had burst its banks. Since receiving the call, 408 one tonne bags have been sent in total.

Alan Stephenson, Quarry Operations Manager at Aggregate Industries said: “The organisation and fast turnaround arranging these loads is testament to the hard work and commitment of the entire site team.

“From the logistics team through to the bagging shed staff and the truck drivers who were summoned at short notice, everyone worked tirelessly to serve the community.”

Local emergency services were also quick to praise the actions of the team, and the Woodhall Spa site and Aggregate Industries remains ready to assist in instances of major flooding.