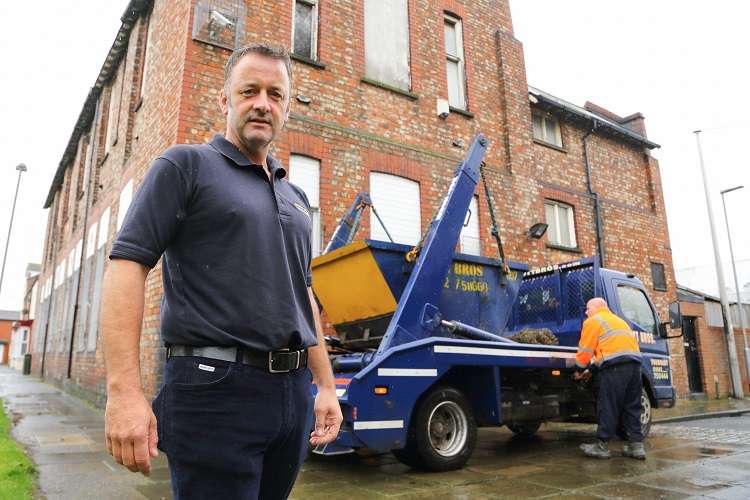 SCOTT Bros. is supporting work to convert a disused Thornaby social club into a war memorial museum and community hub.

The project, centred on the former St Patrick’s Social Club, is the brainchild of Julie Cooper, the landlady of the Don Bar in Stockton, famous for its displays of poppies, military memorabilia and the many thousands of photos of servicemen and women who made the ultimate sacrifice.

Several volunteers and companies have already offered both practical help and support for the fundraising campaign to convert the upstairs of the building into the Don War Memorial Museum and Hub.

Stockton-based Scott Bros. is supplying several skips free of charge and will transport the material back to its centre for recycling.

The planned museum will house a greatly expanded educational display of military memorabilia, including donated uniforms, medals and equipment from various conflicts, together with the photographs and a collection of 100,000 poppies.

A room will also be provided for forces veterans to come and relax, together with a space to host community events.

Downstairs, there will be a licensed ‘Naffy Bar’, games room and an area dedicated to the history of Thornaby through a variety of displays and photographs. Julie also hopes to offer the use of its extensive car park to local communities as a place to stage summer events.

She currently offers 24-hour support to armed forces veterans and the homeless, including the provision of free bacon butties, sleeping bags and shoeboxes filled with toiletries and useful items. She plans to continue this work following the move.

Julie Cooper said: “There is a huge amount of work to be done on the building including electrics, plumbing and installing a lift, but I’ve been amazed by the number of people turning up to offer their help and support.

“I’m extremely grateful to Scott Bros. for providing its skip service free of charge as every penny saved will be invested in creating a centre which honours and supports those who have served in the armed forces.

“I also hope it will have a positive effect on Thornaby, providing somewhere where all sections of the community can use and enjoy.”

She hopes the building work will be nearing completion by next spring.

Peter Scott, a Director of Scott Bros, said: “Julie is well known for the great work she does and over the years has raised thousands of pounds for such charities as the Royal British Legion. She is always willing to help those in need and has a real community spirit.

“Our family used to frequent St Patrick’s Social Club back in the day and I can even recall going to the children’s disco there, so Scott Bros is pleased to be able to contribute towards restoring this building to the heart of the community.”