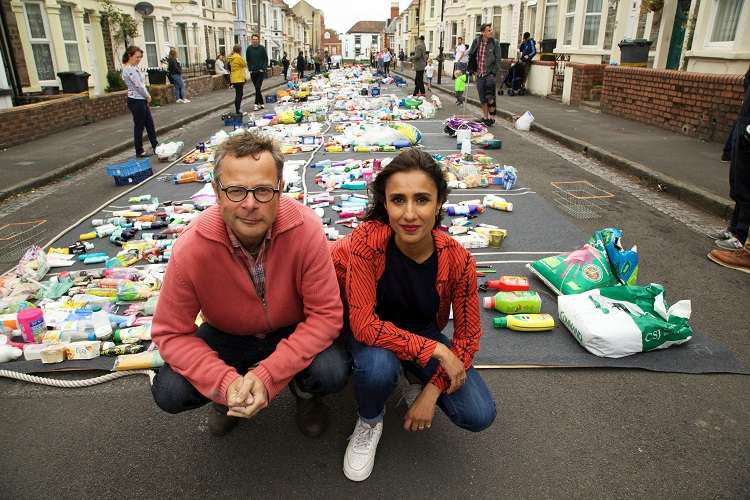 WHEN BBC1 decided to film a fake ‘dumping of plastic into the sea’ for its new series ‘War on Plastic with Hugh and Anita’, they asked Refuse Vehicle Solutions Ltd (RVS) to provide a fleet of five refuse vehicles to do the job.

The trucks feature in the opening sequence of episode one, which was aired on Monday 10 June and shows a convoy of refuse vehicles, filled with plastic, driving to Whitmore Bay, Barry Island. The vehicles then appear to dump their loads straight into sea, whilst presenter Hugh Fearnley-Whittingstall explains that this is happening globally every minute.

The three-part series is about the use of plastics and the opening scene was designed to shock and engage viewers, to convey how much plastic is ending up in our oceans every day. A study completed in 2015 estimated that 12m tonnes of plastic waste finds its way into the world’s oceans each year, equivalent to dumping the contents of one garbage truck every minute.

The producers described it as a ‘bold, solution-driven series that we strongly hope will inspire positive change at every level, from individuals to big business to national policy.’ The plastic was not dumped into the sea, of course, and in reality the loads were actually emptied into skips ‘hidden’ just underneath the promenade wall.

The final episode is being aired at 9pm on Monday 24 June on BBC1 and the whole series is available on iPlayer.

Spencer Law, Managing Director of RVS, said: “We were really pleased to be involved in this show and I hope that it makes people think about – and change – the way they buy, use and dispose of plastic. I have been involved in the waste management sector for many years and it’s great to see that there has been a big shift to recycling especially in the commercial sector with many companies recycling 100% of their waste. Now it’s time for us as individuals to do our bit.”