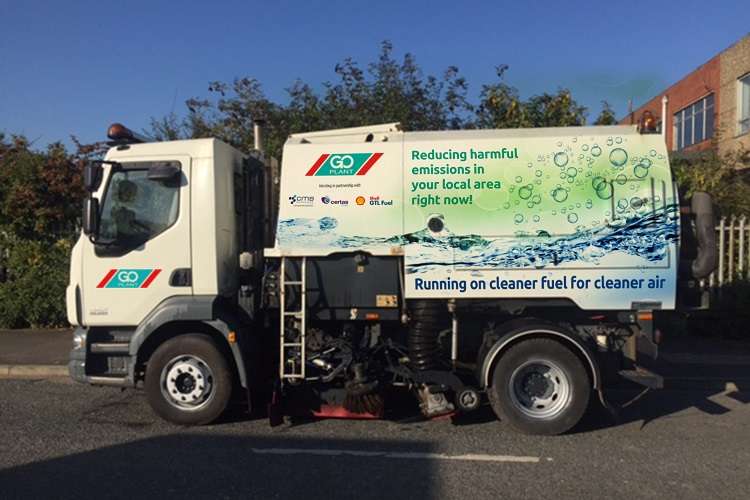 The company will be the first of its kind to carry out an initiative that could lead to the long-term replacement of diesel across its fleet of more than 400 vehicles – and a significant reduction in local emissions.

The announcement of the trials coincides with National Clean Air Day
today (Thursday, 20 June), the largest air pollution campaign in the UK.

Phil Quelch, National Fleet Engineering Director at Go Plant Fleet Services, said: “As one of the leading providers of specialist commercial vehicles in the UK, we’re acutely aware of our responsibility to the environment.

“The search for alternative fuels and the requirements of emission standards being introduced in towns and cities across the country poses a major challenge to the industry.

“But we’re leading the way in the quest for a viable and long-term solution and have been looking into this area for quite some time.

“If the industry was to wait around for new technology to become available, that would take a lot of time.

“But Shell GTL Fuel is a drop-in alternative that has an immediate effect in reducing emissions and improving local air quality without engine modification – and we believe it could be the way to go.

“The comparison testing, supported by data captured with the CMS ‘Go Connect’ system, will present us with the data to measure the reduction of harmful emissions.”

Trials will take place in London and Birmingham over a six-month period starting in July 2019.

The results of using diesel and Shell GTL Fuel in both the main and auxiliary engines will be collected during the process to form the basis of a comparison analysis.

Mr Quelch added: “We’ve looked in depth at the potential of electric and hydrogen vehicles, but the truth is neither the technology nor the infrastructure is really there yet for heavy duty road sweepers.

“We wanted to do something that’s viable now and these trials will help us to decide if an alternative fuel is the solution.

“It’s a fuel that can be used with our existing vehicles and we’re confident it can help us to future-proof our fleet, but the trial will provide us with total clarity of the benefits.”

Previous independent trials have shown that Shell GTL Fuel, exclusively supplied to the UK by Certas Energy, can reduce nitrogen oxide (NOx) emissions by up to 37% and particulate matter by up to 90% compared to conventional diesel.

It can be used as a direct replacement in heavy and light duty engines without the need for modifications or new infrastructure, it’s more biodegradable and provides reduced noise levels in many cases.

“It was introduced to the UK in 2016 and is becoming widely accepted as an alternative fuel solution to immediately reduce local emissions and noise pollution across multiple industries.

“Go Plant Fleet Services will be the first company of its kind in the UK to trial its use with heavy duty road sweepers and I’m entirely confident the data will convince them it’s a good long-term solution.”