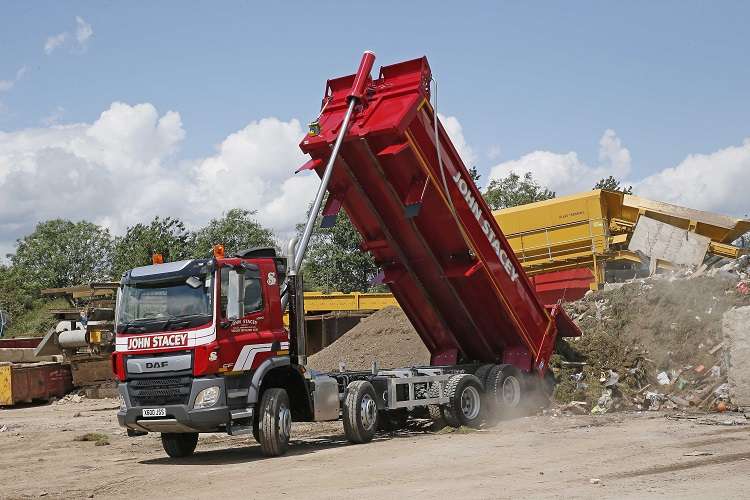 It has to be Thompsons’ tailgates for top tippers

NOW running over 50 heavy trucks, Hampshire-based John Stacey & Sons is part-way through an eight-vehicle fleet upgrade programme, all of its latest tippers being specified with Thompsons Loadmaster bodies fitted with AutoLift hydraulic ‘power up / power down’ tailgates.

“We place maximum emphasis on a truck’s versatility, performance and productivity,” said company director Steve Stacey, “which, for tipper bodies, means we inevitably choose Thompsons. Over the years, the heavy duty  double skinned Loadmaster has proved to be a remarkable piece of equipment, able to carry anything and everything with next to zero maintenance issues or downtime.

“Quite simply, we buy the best tipper bodies we possibly can, so we now specify our Loadmasters with Thompsons’ AutoLift hydraulic tailgate as well. Why? Because they significantly increase the overall performance of the vehicle.”

As the Stacey tippers demonstrate, AutoLift is the ideal complement for the super-tough, double-skinned Loadmaster. Given that this is a tipper body designed to carry loads such as over-sized rocks, rubble or demolition materials, ejecting such irregular payloads runs the risk of damaging a conventional tailgate with its fixed height hinge and toprail. In contrast, the hydraulic cylinders located in AutoLift’s rear cornerposts not only raise the whole tailgate assembly to create a 25% larger rear body aperture, but also hold the tailgate panel in an open horizontal position. As a result, the whole tailgate assembly is now positioned well clear of the exiting payload.

With the load successfully ejected and the body lowered, AutoLift then ‘powers down’ the tailgate into a fixed closed position secured by lugs on the rearmost side of the corner posts. Operated up and down by a single switch inside the cab, AutoLift therefore makes the whole tipping process easier, faster and safer as well as significantly reducing the possibility of incidental damage to the vehicle.

“Over the life of the truck AutoLift more than pays for itself,” said Steve Stacey. “A conventional fixed height tailgate is much more prone to damage which, in turn, means incurring additional costs for repairs and vehicle downtime. AutoLift also adds to the residual value of the truck when we sell it. In essence, AutoLift makes a modern tipper complete.”

Complete with their 450hp engines, Stacey’s new DAF tippers with their Loadmaster AutoLift bodies deliver a really powerful performance from the front of the truck to the rear. Four of the eight new tippers are now on the road, with another two CFs and two Volvo FMXs to follow. The new trucks also confirm that all the tippers in Stacey’s extensive fleet are now bodied by Thompsons.

Speaking at Thompsons HQ in Croydon, Joint Managing Director Scott Burton noted: “We’re delighted that John Stacey & Sons is realising the full benefit of using our AutoLift tailgate, and has once again chosen it for their latest eight tippers. With their trucks often having to carry irregular payloads, this is the ideal application for a tipper tailgate that can be raised higher and out of harm’s way when ejecting the load.

“Making tipping speedier and safer is really what AutoLift is all about.”