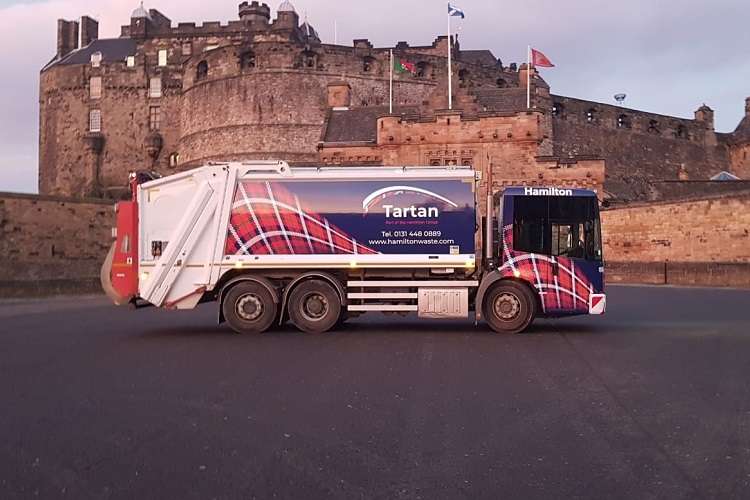 Leading Scottish resource management company, Hamilton Waste and Recycling (Hamilton), has partnered with the organisers of the Edinburgh Marathon Festival to ensure that none of the waste produced at this year’s event will be sent to landfill.

The Edinburgh Marathon Festival (EMF), which took place this weekend, has grown from a single race with 3,000 runners in 2003 to a weekend festival of running with 35,000 people running in eight races across two days. The Edinburgh Marathon Festival is now firmly established as a major event on the UK running calendar raising over £3m each year for charity.  It is also Scotland’s largest mass participation sporting event

Working closely with the EMF’s organiser, Hamilton installed clearly labelled recycling bins for plastic and mixed recyclables at all the race drinks stations as well as the start and finish areas. A small number of general waste bins were also available around the course.

All waste and recycling was taken back to Hamilton’s recycling facility in Musselburgh where it was sorted and graded for future use in the manufacture of new products. The small amount of waste that cannot be effectively recycled will be used in the manufacture of a sustainable waste derived fuel. This Solid Recovered Fuel (SRF) is used by energy intensive businesses to offset the use of traditional fossil fuels.

Commenting on the partnership Hamilton’s Managing Director, Robin Stevenson, said: “We share the EMF’s ambition to further reduce the amount of waste produced by the runners and spectators at the event and ultimately to eliminate single use plastics altogether. Delivering zero waste to landfill is a vital interim step to ensure that the environmental footprint of this flagship event is minimised and to prevent these environmentally and commercially valuable secondary resources from being lost forever in landfills.”

Kenya’s Dan Tanui raced to glory in the men’s event with a winning time of 2 hours 30 minutes and 13 seconds. The women’s race was dominated by Winchester’s Melanie Wilkins who lead from the front with a time of 2 hours 42 minutes and 56 seconds. The recycling and running successes were made even more impressive by the challenging weather conditions with persistent rain and winds up to 39mph.