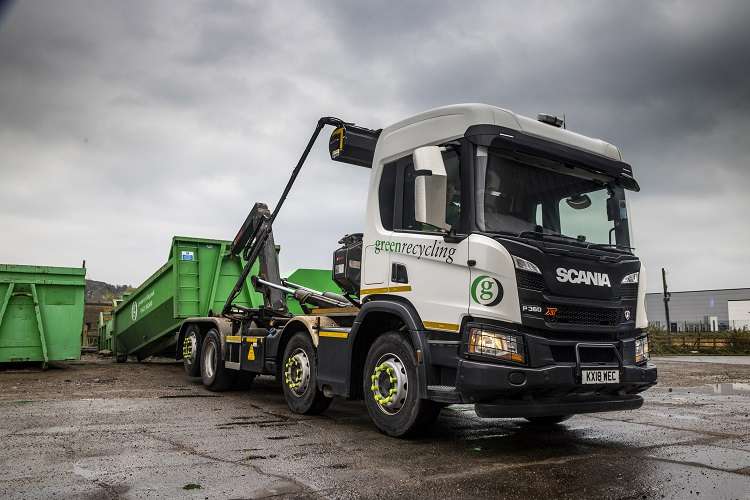 Traditionally, Green Recycling always ordered 8×4 hookloaders.  However, these vehicle’s telematics data demonstrated that they only spent two percent of their lifetime off-road, which has driven a shift from 8×4 double-drive specification to 8×2 rear-steer/lift axle. In addition to specifying this more manoeuvrable chassis, the firm has reduced engine power from the 410 horsepower it previously specified to 360 horsepower. Similarly, Green Recycling has taken the opportunity to amend the wheelplan and improve manoeuvrability of its refuse collector by switching from 6×4 double-drive to 6×2 rear-steer.

Green Recycling Managing Director Rob Smith explained: “We are always looking for ways to increase efficiency within the business and use technology to improve processes. When we found out that we could spec the vehicles using real-life data to make them more efficient, increase uptime and make financial savings, it was a no-brainer for me.”

The two new XT vehicles have been specified with additional money-saving features: both have Scania’s fully-automated Opticruise gear selection systems, which have been locked into economy mode to maximise fuel efficiency, and the size of the fuel tanks has been doubled to cut down on the refuelling time.

Rob Smith continued: “We have seen so many advantages of the vehicles already. Our drivers appreciate the extra manoeuvrability, and eco-mode makes driving more relaxed. But for me, the biggest win has been our fuel efficiency, which has increased from 7.8mpg to 9.7mpg. By combining the savings on fuel and the reduced cost of the Scania repair and maintenance agreement supplied with the trucks, I would estimate we are saving around £1,000 a month already.”

The vehicles, financed by Scania Finance Services, are both on seven-year full repair and maintenance plans managed by TruckEast Witham. To maximise efficiency in operation, both trucks also have a seven-year telematics and remote tachograph download package activated.

Rob Smith added: “The service, back up and response I have from TruckEast and Scania is why I have been buying them for 15 years. One of our refuse collectors does 200 collections in just one day so uptime is critical for the business, as if bins aren’t collected you get hundreds of phone calls. I’m a demanding customer for sure – we give our customers a 10/10 service, so I expect the same.

“We are now looking at taking advantage of the driver training that Scania offers as it’s not just about having the right truck. We’ve already had one example of our telematics package highlighting a driver who was doing a lot of harsh braking. Now we’ve identified the issue, the resolution has had a knock-on effect of the vehicle not experiencing as much wear and tear, thereby increasing our uptime and reducing costs further. The technology on these vehicles is a positive thing and should be embraced.”