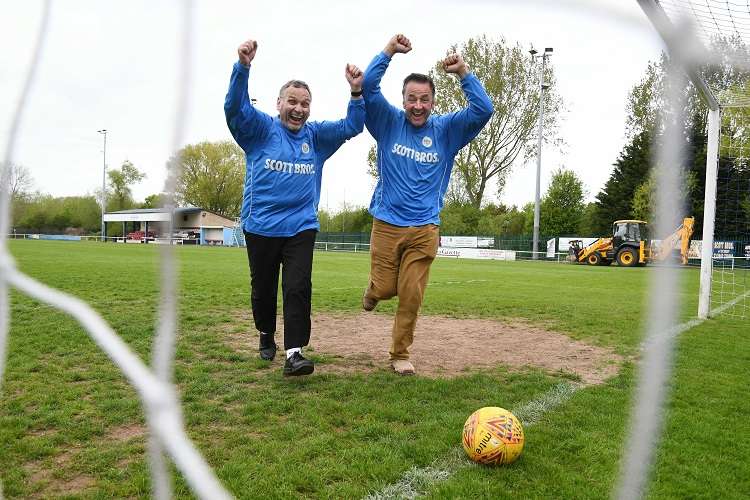 SCOTT Bros. is supporting newly-promoted Thornaby FC by helping upgrade its Teesdale Park ground as the club prepares for life in Division One of the Northern League.

The Stockton-based haulage and plant hire firm has cleared and levelled an area behind the North End goal to create a 150-space parking area – allowing the club to meet more stringent league requirements.

David Scott Snr, who founded the family firm, is the club’s President and a former chairman of Stockton FC before it was renamed Thornaby FC in 2000.

Trevor Wing, club secretary and treasurer, said: “Without the financial and practical support provided by David Scott Snr and Scott Bros. over many years, we wouldn’t be in the position to achieve promotion now. Everyone connected with Thornaby FC really appreciates the huge contribution the Scott family has made.

“Not so long ago the future looked bleak but, after a ten-year absence, the club is back in Division One and we hope this is the start of a real revival in its fortunes.

“A great deal of effort has gone into improving the facilities to meet the standards required in Division One and we hope this will attract even more fans to our games and generate more income.”

The club has suffered several setbacks over the years and the future seemed bleak when the side was forcibly relegated due to the state of the ground following a spate of vandalism, fly tipping and thefts.

At one point, its matches were being attended by just 30 people and the club was not making enough money to even cover the referee’s fee.

Since then, officials, supporters and the community has rallied together and in recent years the ground has benefited from a range of improvements, including the refurbishment of the stand. This season the club, which has attracted crowds of up to 500, finished second in Division Two, assuring automatic promotion.

Scott Bros. has carried out various work free-of-charge at the club including providing excavators, top soil, a pitch roller, undertaking lawnmower repairs and filling in potholes.

It has also contributed financially to such projects as the replacement of the floodlights and refurbishment of the players’ changing rooms.

Company director Peter Scott still recalls, at the age of ten, being club mascot during the 1986/87 season, attending every match home and away until 1990, when he became a Middlesbrough FC season ticket holder.

He said: “We are football fans and support all the local sides on Teesside but, due to my dad being club President we have a strong affinity to Thornaby FC. It has done tremendously well to return to Division One following a long absence and we are pleased to do our part by creating this fans’ parking area.

“We are a family firm and Thornaby FC is a community club and, as such, we hope our efforts will help it go from strength to strength to attract more success and supporters.”