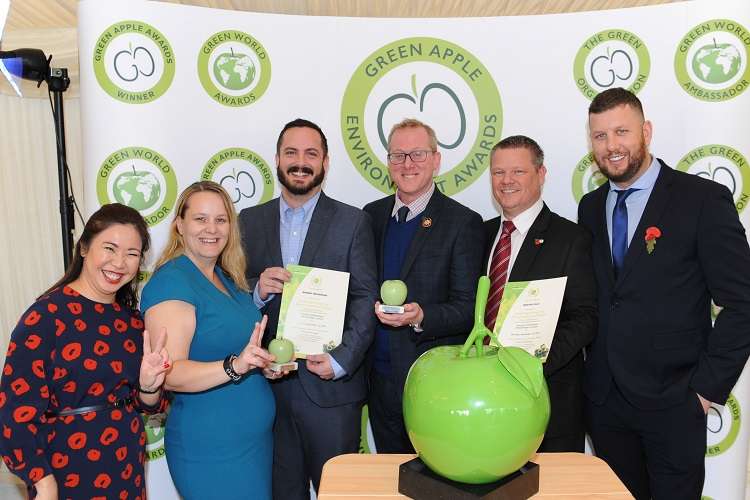 THE longstanding and fruitful relationship between Enva and Woodhead Group has been officially recognised in the form of a Green Apple Award for Environmental Best Practice, recently presented to both parties at a ceremony in the Houses of Parliament in London.

Established in 1994 as an annual campaign, The Green Apple Awards recognise, reward and promote environmental best practice around the world, across the private and public sectors.

The scheme was one of the first to be accredited by the RSA as an official feeder scheme into the European Business Awards for the Environment and remains one of only a handful of accredited campaigns to this day.

Enva and Woodhead Group have worked in partnership to deliver market-leading waste and recycling on Woodhead Group’s portfolio of projects across the Midlands for over 15 years now, but the last 12 months has seen the focus sharpen on improving waste management performance.

Sustainability has been placed firmly at the forefront of all business activities, underpinned by the working practices, terms of engagement and lines of communication established between Enva and Woodhead Group.

As a result, Woodhead Group now consistently achieve zero waste to landfill for their sites and continue to make solid progress in onsite segregation.

The current recycling rate is 99%. 13 per cent of materials are segregated for recycling on-site with the remainder recovered through Enva’s state-of-the-art recycling facilities in Nottingham and Leicester.

Of particular note to the judges, was their prevention-first approach to waste management, in line with the Waste Hierarchy model.

Where possible, Woodhead Group seeks to eliminate waste by diverting materials for use in the local community.  A key example which demonstrates the mutual benefits of this is at the New Bolsover Model Village, where materials such as sinks, concrete slabs, timber and old roof tiles were donated to local allotments to help the community to grow their own food.

In addition, rainwater harvesting systems on this site were used for landscaping purposes and the excess donated back into the community free of charge.

By embedding the waste hierarchy deep within the business and continuing to share best practice effectively throughout the organisations, Enva and Woodhead Group look set to deliver even greater environmental improvements from this fruitful relationship.