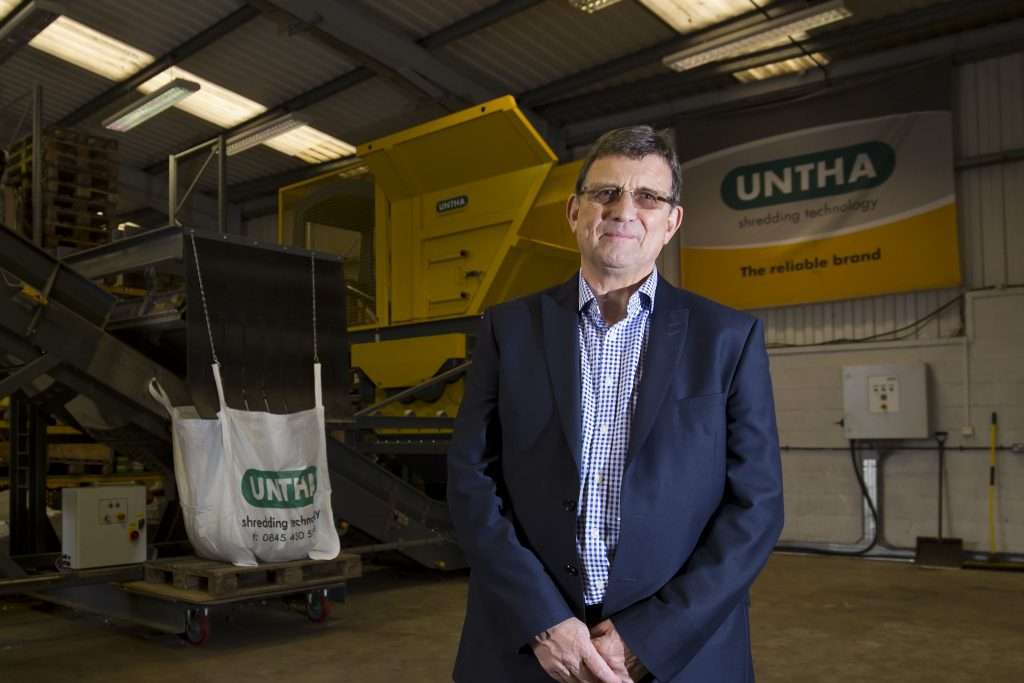 Chris Oldfield, chairman of waste shredding specialist UNTHA UK, has announced his retirement from the recycling industry following a career spanning almost 50 years. He has fully handed over the reins of the company to managing director Marcus Brew.

With mechanical engineering, works and industrial management qualifications under his belt, Chris’s first major step into the world of commerce saw him help set up the specialist chemical mixing, processing and packaging plant Cod Beck Blenders in the 1980s.

Building upon this entrepreneurial journey, he then co-founded the world’s first commercial manufacturing plant of waste dispersible granules for pesticides. Established in the 1990s, the Teesside-based Exwold Technologies plant remains operational today, and is now a multi-million-pound organisation with more than 100 staff.

In September 1997, another acorn of a business idea began in his garage. Riverside Waste Machinery started out as a one-man-band supplying balers and shredders. However, the company split in 2011, having attracted the attention of one of the most renowned waste technology organisations in the world – Austrian headquartered UNTHA.

Riverside’s story continued through by Chris’s son Jonathan Oldfield, a waste baler specialist. Meanwhile, the shredder side of the business became UNTHA UK – a subsidiary of the global brand.

Commenting on how the decades have unfolded, Chris explained: “Little did I know back in the late 1990s that a North Yorkshire start-up would go on to become the success that it is today. We’ve encountered some tremendously difficult economic periods, but I am extremely proud of the reputation we have gone on to achieve at the forefront of a competitive industry.

“Now, after several years of succession planning, I feel this is the right time for me to hand the business over to a very capable team. I’m happy in the knowledge that my vision will be carried on and built upon, and I look forward to seeing how the story continues.”

Chris Oldfield has long been a vocal speaker

Away from UNTHA UK, Chris has long been a vocal speaker in the waste and recycling industry, having been repeatedly asked to speak at national conferences and events.

Highlights include being a panellist at the Energy from Waste Conference, delivering multiple thought-leadership seminars at RWM, and authoring more than 50 papers for technical journals covering topics ranging from RDF export to redefining waste as a resource.

Marcus Brew said: “Chris Oldfield has positioned UNTHA UK so that it is it fit for the future, while maintaining an entrepreneurial spirit. By beginning the transition towards his retirement in 2015, we’ve been able to ensure a seamless handover.

“With brand support from Austria, plus the structure that Chris has left behind at Untha UK, we are confident that both staff and customers will benefit from his legacy.”

UNTHA UK has installed more than 500 shredders in the UK and beyond, and over 10,000 machines are now in operation worldwide.