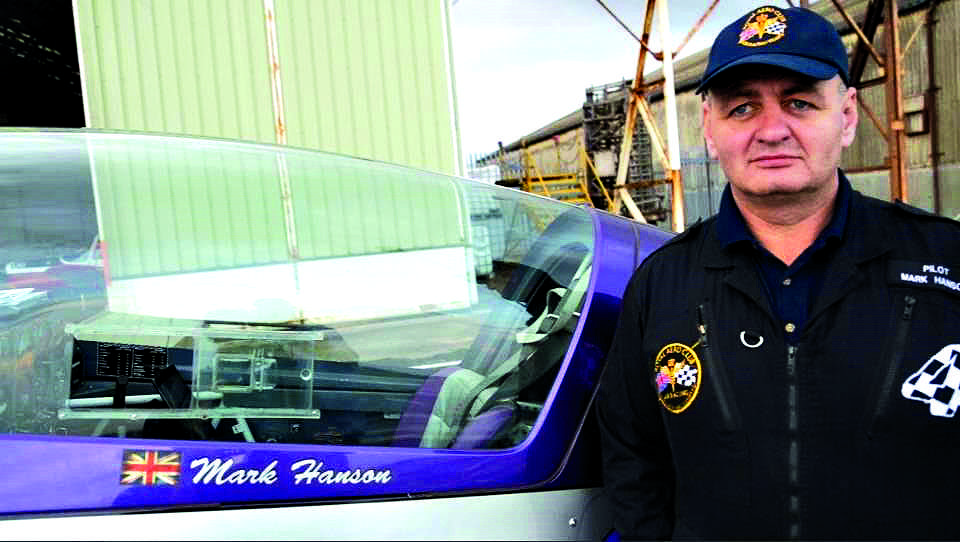 Remember the days when old bangers used to feature those little stickers on the bumper that declared: “My other car’s a Porsche?”

If he ever felt like it, skip hire business boss Mark Hanson could go one better with a sticker on the back of his favourite digger. He could reveal his other mode of transport  is a German manufactured Extra 300L lightweight carbon-fibre based aircraft, complete with powerful 8 litre engine.

Or, in other words, the kind of tricky little plane used by Red Bull pilots, one that spins, flips, barrel rolls and performs eyeball popping mid-air stunts which leave stomachs heaving, and those of a nervous disposition looking away, writes SANDRA DICK.

It’s a bit of leap from the wheel of his digger at Quicker Demolition & Skips in Burnley, where he employs seven staff and has built up the business from a single wagon and a few skips to four trucks and over 300 skips.

Up in the clouds Mark performs gut-wrenching manoeuvres.
On the ground, he’s a hands-on boss, overseeing mainly demolition site waste, a healthy number of domestic uplifts, and is also recycling around 95% of his waste.

It might not be the biggest or wealthiest company in the world, but according to Mark, what’s more important is
running his business at a level that gives him the chance to enjoy what he really wants  to do. And that’s flying.

“It’s hard to make a living and I don’t make a fortune. But I make enough to have a decent life and look after the lads,” he shrugged. “I’m happy working five days a week, and flying at weekends.” 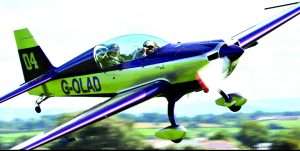 Which is why the 43-year-old dad of five spends his spare time performing daredevil tricks above the farm in Padiham, Lancashire where he lives, and practicing for air shows, competitions and more recently, world records.

39 TAKE OFFS AND LANDINGS AN HOUR

That last challenge took place at Kirkbride Airfield in Cumbria in late summer, when he shattered the world record for the most take offs and landings in an hour. He managed 39 – harder than it sounds.

“You take off, as soon as you’re airborne you turn left, 90 degrees, then climb to 1000ft,” he explained. “Then you pull the throttle back and dive.”

The G forces climbing to 1000 feet in seconds, and then diving back to the ground, have been likened to sitting on ‘The Big One’ roller coaster at Blackpool non-stop for an hour. Then there’s the screaming towards the earth at 100 mph, while keeping cool.
As the tiny aircraft shudders and screams, Mark grapples with the controls and targets a 20 metre section of runway.

He has to land dead in the target. A bounce doesn’t count. Landing slightly ahead of it is a fail, so is landing just behind it. Crashing isn’t an option.

It turned out Mark had five failed attempts before finally getting it right. He eventually aced 39 landings – three above the world record. The challenge raised money for his local hospice, and left him frazzled.

“It’s very tense, and it means a lot of concentration. There was a lot of thinking because you’re doing take-off and landing constantly – that’s your busiest workload as a pilot.

“Flying from here to there, that’s nothing. But coming into land and take-off, you are taking all the chances, and it’s much more challenging.”

Mark was driving diggers when he heard of demolition contracts becoming available with a local authority.

“I kind of blagged my way into this business,” he laughed. “I’d been driving diggers all my life, I thought demolition couldn’t be that hard.”

“I’m a bit of an adrenalinE junkie”

He set up a small business, and spent the next 15 years knocking down around 3500 council houses. When the contract ended 18 months ago, he branched out into skip hire.

Today the bulk of work is hardcore waste, like soil and wood from roofers and builders, while the rest comes from commercial and domestic skips.

In the yard sits a couple of 17 ton vehicles including a skip loader with telescopic arms, an 8 wheel multi-uplift wagon, plus a pair of 7.5 ton lorries and a collection of mini diggers and dumpers available for hire. The real horsepower, however, is in the aircraft hangar…

“I’m a bit of an adrenaline junkie,” Mark admitted. “I was racing Subarus in the Isle of Man with a friend. He said he’d bought an aircraft. I thought I’d like a go at that.

“I started with microlights, and absolutely loved it.”

He raced through flying exams, racking up air time and moving to faster and more agile aircraft each time. Mark reckons the day job of driving a digger has been key to getting to grips with aircraft controls.

He added: “Driving a digger, you need good hand eye coordination. If you can learn the controls and drive a digger or a car, you can fly a plane.

“The hard bit is the exams and learning meteorology, air law, navigation.”

He turned out to be a natural daredevil aerobatics pilot – last year he scooped the Royal Aero Club’s Paul Walker Trophy after a 92nm race over the North Yorkshire skies, came seventh in the British Championships and 13th in the European.

His main competitor turned out to be a broken undercarriage which meant a month long wait for a spare part, losing vital points that could have nudged him further up the rankings.

Next up? There are plans for advanced aerobatic competitions and, of course, a jet.

It’s on the shopping list and is, agrees Mark: “A schoolboy’s dream. It’s getting it air worthy and the maintenance, but appearances at air shows should cover the costs.”

Meanwhile, there’s always the Extra 300L to take for a death defying spin. “To me it doesn’t feel like any big deal,” he said.  “There are times where you push it until the aircraft stalls. It’s because you’ve pushed too hard, and you’ve got to learn how to handle that.

“Stuff like that is just part of the fun.”