SUNDAY night and the phone rings. You’re settled down in front of the telly – do you answer knowing it’s something to do with work… or let it ring?

Most would probably turn up the TV and ignore the phone. Jane Craig though, who sits proudly behind a  desk at Blue Scotland’s massive new base in Stirling, insists the weekend call – the one the rest of us leave to the voicemail – is just part of the job – regardless of which day it is.

Jane said: “If it means coming in on Sunday to get a part for someone, we’ll do it – it’s like a challenge. That’s the culture here. We d

o what it takes to help people.”

It’s why Paul Houston, who runs their storeroom, has been found at 10 pm on a weekend night, picking out a bearing or gear box, springs, valves or pumps, or whatever is urgently required somewhere from the tip of northern Scotland, to the fringes of the north of England.

Within hours, a product can be on site, either in the hands of one of Blue Scotland’s seven engineers, or fast tracked to a customer for fitting.

Storeman Paul and Service Manager Adrian Millar have an almost encyclopedic knowledge of pretty much every spare part going.  And with room for around half a million pieces on the storeroom shelves, they need it.

It turns out all Blue Scotland staff at the new 3.5 acre base share a dedication to customers above and beyond the call of duty, from management to shop floor.

Upstairs from the parts department and a cavernous 40,500 square foot warehouse big enough to act as a vehicle showroom, is general manager Allan Kane’s office.

He insists the ‘can do’ attitude to customers’ needs, a massive stock holding, and joined up approach to selling kit he calls “synergy” – makes the Blue Scotland operation stand out from the crowd. Rather than selling kit and Allan Kane moving on, or delivering a part but not much else. 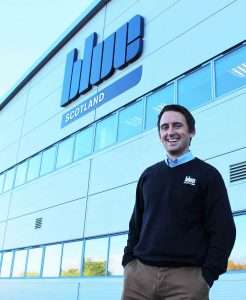 Blue Scotland employs a holistic approach to keeping customers ticking along. This approach is the same for all customers from quarry or demolition businesses, to small-scale skip hire firms, waste and recycling plants, local authorities or other commercial operations.

“The car industry sets the benchmark,” Allan (RIGHT) explained. “If you buy a car, the dealer continues to communicate with you well after you buy that car. They’re regularly on the phone to you offering customer support.

“Blue Scotland sells you a machine, then you get the back up and the parts. So it’s all included together.”

Distance, even when it means reaching outposts such as Scotland’s furthest away islands, doesn’t faze him either. Nor does that idea of springing into action – weekends included.

“Why shouldn’t we be raising the game?” Allan added, “as our improved facilities enable us to do that?”

There’s a team of 20 staff, including eight engineers, who are often out on the road, plus three service department staff to keep work schedules running on time. They have an incredible capacity to identify spare parts from the vaguest of descriptions, and know precisely which engineer might be free at any particular time.

Like Jane in Spares, service controller Mandy Dawson thinks little of pulling out the stops to keep customers happy. She explained: “A customer calls because they need a part. Rather than have them trying to find an engineer to fit it, we supply the part and the engineer.”

BLUE SCOTLAND PULLS OUT ALL THE STOPS

Telematics equipment on customer vehicles and equipment tracks throughput, hours of operation, and when a service is required. The information is sent to the Blue Scotland office, helping staff there keep on top of performance.

Should a breakdown occur, Blue Scotland’s engineers use the tracker information to diagnose problems and arrange parts. When arriving to carry out repairs, they’re already armed with spares and a clear idea of what’s needed.

Changed days from when Blue Scotland MD Austin Carey was running a dealership for Powerscreen equipment from his own kitchen. He went on to hook up with Powerscreen London dealer Eugene Donnelly, Brian Maxwell at Powerscreen Southern, and Pat McGeary who ran Powerscreen Central. Together they launched Blue Machinery in 2004.

Their ethos from the start focused on putting customers’ needs first, whether they were investing in new kit, second hand gear, or spares. 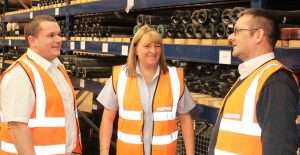 ry is one of the UK’s leading suppliers of mobile equipment to the quarry and waste industry, specialising in Powerscreen crushers and screeners, Doppstadt shredders, MDS trommels, Terex Fuchs material handlers and BlueMAC Waste Systems, another arm of the Blue Group business. Last year, turnover was in excess of £100m.

At Blue Spares in Warrington, there’s £3m of stock and 50 staff. Every day they pack and dispatch more than 1000 items.

Meanwhile at BlueMAC, formed in 2013 and expected to turn over £7m this year, customers from the scrap and waste recycling industry around the world can pick up a single piece of equipment, or order a bespoke integrated processing system.

That’s what Dem-Master Demolition and Total Recycling in Bathgate did. Their investment in a bespoke MRF facility for heavy materials, built by BlueMAC and installed in October, has given the business the chance to focus on bigger  clients.

“We got the hands on attention from Blue we didn’t feel we got with others. The personal touch made the difference,”
Johnston McCulloch, Director, Total Recycling.

Meanwhile another, perhaps surprising, element of Blue Scotland’s work is training operatives to carry out their own maintenance, repairs and optimising operational efficiency. It might sound like a detrimental strategy, but Service Manager Adrian insists the workshops make sense.

“We bring guys in, and give them half a day’s training so they’re familiar with daily and weekly maintenance, as well as hints and tips about the equipment,” he added. “If things do go wrong that they can’t fix,   there’s always the option of phoning us for help – weekends included.”