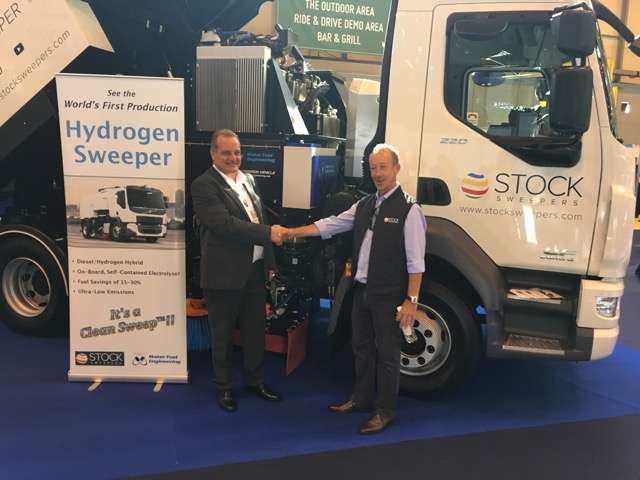 The world’s first Hydrogen hybrid sweeper has been launched, and is now helping to keep the air clean as well as the streets.

Stock Sweepers worked in collaboration with Yorkshire-based Water Fuel Engineering (WFE) to reduce emissions in the sweeper’s auxiliary engine, which powers the vehicle’s brushes and vacuum.

The WFE HydroGen 3.1 electrolyser works synergistically within the conventional diesel engine, to introduce oxy-hydrogen gas into the combustion chamber. There is no need to re-fuel with Hydrogen, as the electrolyser delivers oxy-hydrogen on-the-go and on-demand.

The richness of the mix reduces fuel consumption by at lest 15%, and emissions by as much as 80%.

“We have all become accustomed to having clean streets in our towns and cities thanks to the huge improvements in Road sweepers in the last 10 years”, commented Jeff Stock, MD of Stock Sweepers.

“However with this modification to our latest generation of vehicles, we have really made a ‘clean sweep’.  With modern legislation we need to be sure we don’t just leave the streets clean, but the air as well, and this vehicle boasts the lowest emissions of any Sweeper on the market.”

Stock Sweepers and Water Fuel Engineering are now collaborating on the introduction of an electrolyser on the main Euro 6 engine too.

“Given the success of the auxiliary engine, it’s an obvious next step,” commented WFE’s Marketing Director Phil Davies.

“The Office for Low Emission Vehicles invited our two companies to put forward a proposal that will deliver ultra-low emissions levels to enable 2020 targets to be met, or even exceeded.”

The technology is now operating on a range of utility vehicles across the UK, including Refuse Trucks and HGVs, and has a pay-back period averaging just one year.

Above: Angel Nenov of WFE and Jeff Stock of Stock Sweepers at the RWM Show