A generation ago Vikki Jackson-Smith’s dad Alan would head to the beaches of the North East to catch the low tide at just the right moment.

If the waves had done their job and he’d timed it well, the shoreline would be black, covered with tonnes of coal washed up from the seams in the bed of the North Sea.

For hundreds of years ‘sea coalers’ like him had farmed the shore. Collecting it was back breaking work, but the coal could be sold and profits could be made.

Of course, he couldn’t have imagined those shards of coal would provide the foundations for a multi-million pounds business.

Nor that the way he ran his coal firm would form the blueprint for his daughter’s very modern style of business management.

Years on, and Vikki (RIGHT)  is at the helm of Hartlepool based J&B Recycling, a business with a £12m turnover, visions for expansion, and a management style that seems to have come straight from the very modern pages of a ‘how to keep your staff happy’ manual. 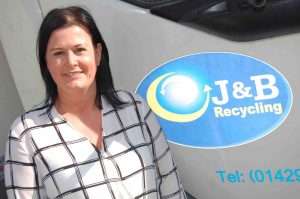 In May, the firm’s 200 staff learned their health and wellbeing was to become a business priority. J&B Recycling, with its roots in that old coal business, had unveiled very modern plans to provide support  for their basic health needs, from dental treatment to physiotherapy, massages to chiropody, cut price gym membership to discount spa days and reiki sessions.

They are the perks you might expect in a trendy city office. But according to Vikki, J&B Recycling Managing Director, they are simply a modern twist on the kind of good employee relations her dad believed in, and passed down to her.

CARED ABOUT HIS STAFF

“He always cared about the staff, and wanted to look after them,” she explained. “My mentor was my father – everything I learned in business came from him, his attitude and skills with dealing with staff, and I learned from him.”

Offering healthcare support, she adds, is part of her personal commitment to a loyal staff, some of whom have been with the family from the boom days of her dad’s solid fuel business, to the point when it seemed the firm would have to close for good.

Instead the business was reborn as one of Teesside’s leading waste management and recycling companies. Thanks to a constant drive to innovate and invest, it now has bases in Hartlepool and Middlesbrough, serving private and public sector organisations throughout the north east.

Each year around 120,000 tonnes of waste which would have been destined for landfill, flows through its sites, usually emerging ready to be made into something else. And there are big plans to dramatically increase that figure in the next couple of years.

She arrived at her dad’s solid fuel firm with plans to work for a few months, before training to be a nursery teacher. Instead, she spotted an opportunity to make better use of the firm’s trucks, rejigged the transport schedules, and took the role of transport manager at the age of just 17.

A large chunk of the business involved importing coal from abroad, for use by the area’s power stations. However electricity board privatisation suddenly meant their customers could import their own coal. And as the family business slumped, domestic gas use soared, squeezing the business at both ends.

“It was a case of close the business, or look to diversify,” says Vikki. “We had just 20 staff left. We had the infrastructure, the licences, we could screen and wash coal, we had machinery. But we needed to find different ways to use the skills.”

The answer was found, thanks to a late Nineties booze craze for new flavoured ‘alcopops’ like Hooch and Bacardi Breezers.

“The bottles were non-returnable, and were going into landfill. It was increasing costs of waste disposal for the hospitality trade,” explains Vikki.

Washing and transporting bottles wasn’t that different from grading and washing coal. From staring at closure, the business started to look up.

A new £5m automated materials recycling facility was opened in Hartlepool at the original coal depot site, to be later joined by another on a neighbouring site.

One handling kerbside waste, the other dealing with assorted other waste –  the company deals with up to 75,000 tonnes of recyclables per annum. Thousands of mattresses from the hospitality and public sector are shredded, while the metal is recycled and the remainder goes to make energy from waste.

A Middlesbrough operation opened two years ago for commercial industrial waste, and is currently handling 50,000 tonnes of waste a year. There are plans to invest a further £1.7m in the site, to increase throughput by 100 per cent. 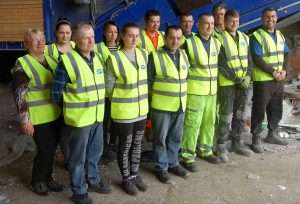 A £7.5m investment from the Business Growth Fund two years ago, means the firm is no longer entirely family owned. However in return for handing over a small share of the business, cash is now available to fund major plans for growth.

Hopes are high the current £12m a year turnover will increase to £16m in the next year.

It’s a long way from how it all began. However, family values remain at the heart of the operation.

A sign of how close-knit the staff are emerged recently when, touched by a colleague’s heartbreaking loss of a young child, they dressed in pink for a day as a show of support.

“We have got fantastic staff,” adds Vikki. “It’s important to me to look after their wellbeing wherever it’s commercially viable. It adds value to the business, and we want people to come here to work because they are looked after.

“And when people come here, they usually stay.”