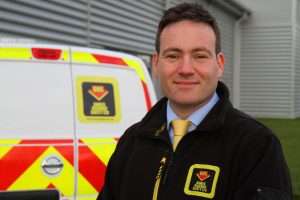 He set up the flourishing company – which showcased the innovation at Tip-ex 16 – after fifteen years in the Met on a police bike or response motorcycle, during which he supervised a team of front-line officers at collisions and other incidents in London.

A keen cyclist, James focussed on limiting injuries and fatalities involving cyclists and pedestrians, and produced a range of British made safety solutions. The cop turned businessman has also been supported by former Metropolitan Police traffic officers, and the company’s principal engineer Jim Holden.

The company’s revolutionary DawesGuard™, is unlike other standard under-run bars, and makes contact with the road surface to prevent an HGV wheel passing over a person on the ground. The driver is able to retract the system using controls in the cab, allowing full ground clearance when the vehicle is used in off-road environments such as building sites and quarries.

James said: “The DawesGuard™ works with a spring mechanism under tension, and the research and development process has taken two years. In my career in the police force I witnessed hundreds of accidents, and have been motivated purely by safety.

“The product works well with different depths of trailers and skips loaders, and forms a physical barrier on the road to prevent a pedestrian or cyclist being dragged beneath the wheels. It can be used on all terrains, and helps solve the issue of HGV driver blind spots.”

The product was one of the highlights at Tip-ex 16, and attracted a lot of interest from many of the other companies present at the show.