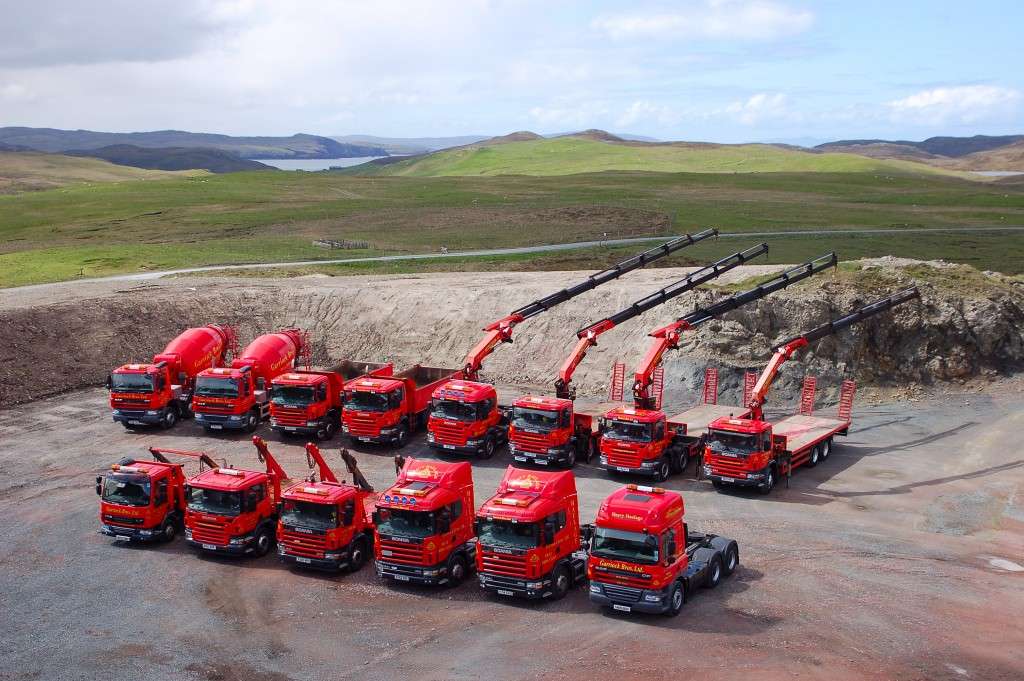 It is as far north as you can go without leaving UK territory, and is almost as close to Bergen in Norway as it is to Aberdeen.

The Shetland Islands are lashed by the North Sea to the east and the Atlantic to the west, and are so remote they typically appear at the edge of UK maps in an ‘add on’ box. There could scarcely be a more unlikely place to find a mini empire in full flight.

Yet from his office at the very tip of the weather-beaten outer reaches of the UK, George Garriock has been slowly but surely creating a hugely successful business, with tentacles stretching right across the globe.

“You fall off the map, when you come up here,” says George, managing director of Lerwick-based Garriock Bros Ltd, referring to Britain’s most northerly island. “And when you live on an island,” he added, “You’ve got to diversify.”

He’s not joking, when he talks about diversifying. After all, there can be few privately owned businesses anywhere in the UK that can boast of being able to provide anything from fishing tackle to quad bikes, clothes, windows, glass coffee table tops to DIY hand tools, assorted skips for hire, boat equipment, and, for good measure, a 51 tonne Metso Lokotrack crusher and assorted other heavy plant machinery.

Whatever you want, there’s a fair chance George Garriock’s Lerwick-based multi-faceted emporium will either have it, or be able to get it for you. Distance, it transpires, is no great obstacle.

For example, around 600 miles separate Shetland’s main port of Lerwick – population 7500 – from London. And yet from Garriock Bros Ltd’s Germista Industrial Estate office, business pings south to a base in Orkney, on to Inverness, Edinburgh and Coventry, then beyond taking the firm to Europe, South Africa, and across the globe as far as Singapore.
You’ve got to admire a business that has not just flourished in such a remote location, but risen to be among one of the most successful of small and medium sized business both in the area, and in its’ field. Powered by a staff of around 160, half of their annual £24m turnover is as a result of trade generated outside of the Shetland Islands.
“To be honest, where we are has never really been an issue,” shrugged George, 60, a native Shetlander, who is more than used to the challenges that come from living on one of the UK’s most distant outcrops.

“The logistics aren’t a problem. The internet works fine, and we’ve never had a problem with the phone signal.

“The weather? Well it’s always an issue,” he conceded, “but only because the Shetland climate is six months of winter and six months of bad weather.”

Dark and wild in winter, windy all year round – hurricane force 12 gales are not unknown – but with stunning beaches and unspoilt landscape, when the fog gives way and the Northern Lights dance Shetland could easily be not just one of the most remote spots for a business, but also one of the most beautiful.
Tourists come in droves to eye up the scenery. George, meanwhile, eyes up the next stage of developing his business.

It began back in the seventies and a small joinery business run with his brother Martin, when both were still teenagers. Martin moved on, George stayed at first building hundreds of Norwegian Fjogstad houses across the Isles, then crossed into new territories, and diversified along the way.

“We got into plant hire,” recalls George. “Then it was more plant hire than joinery – there were far better prospects in that than in joinery. Now I’ve got a lot of different companies, different departments.”

So many, it’s hard to keep track. The first small plant hire business to come under the Garriock banner was soon cultivated into the largest plant and equipment hirer in Shetland. A couple of years later, he did the same with a plant hire business in neighbouring Orkney.

He scooped up a garage, and ventured into car and van hire – diversification, the name of the game.

Some might have settled at that. However a contract crushing business just outside Edinburgh was soon on the books, followed by a new role as official Scottish distributor for Finnish-based mining and construction equipment firm, METSO.

But even that isn’t enough. The business has three Shetland quarries on its books, producing ready mix concrete in blocks, bespoke pre-cast concrete products and aggregate. Some waste collected by the firm’s skip hire section ends up being recycled there, some in the local authority recycling depot.

Of course the fact that Shetland’s economy has been buoyed by the presence of gas and oil exploration firms has helped. Virtually every large civil engineering development on the islands is usually accompanied somewhere down the line by a Garriock Bros lorry, truck, skip or low loader.
As George pointed out: “In Shetland, everyone is a customer, from the public to the contractor.”

He’s not stopping yet. Top of his shopping list is a suitable business to take over in the north of England, that can act as a halfway house between his Scottish interests and his £3m base in Coventry.

With so many balls in the air, it’s hard to imagine how the grandfather of four keeps on top of it all.
“I’ve been doing it for 40 years, so I know what I’m doing,” he insisted, going on to heap praise on his five other directors and staff for rising to each challenge he gives them.
“Sometimes I do go to bed at night, and my head is spinning. I’m 60 now. Of course I think about easing up and retiring. I want to enjoy a bit of life too.
“But I also think I’d get bored. Business is like a sport,” he added, “You want to keep on going, see what’s going to happen next. And I enjoy the challenge.”