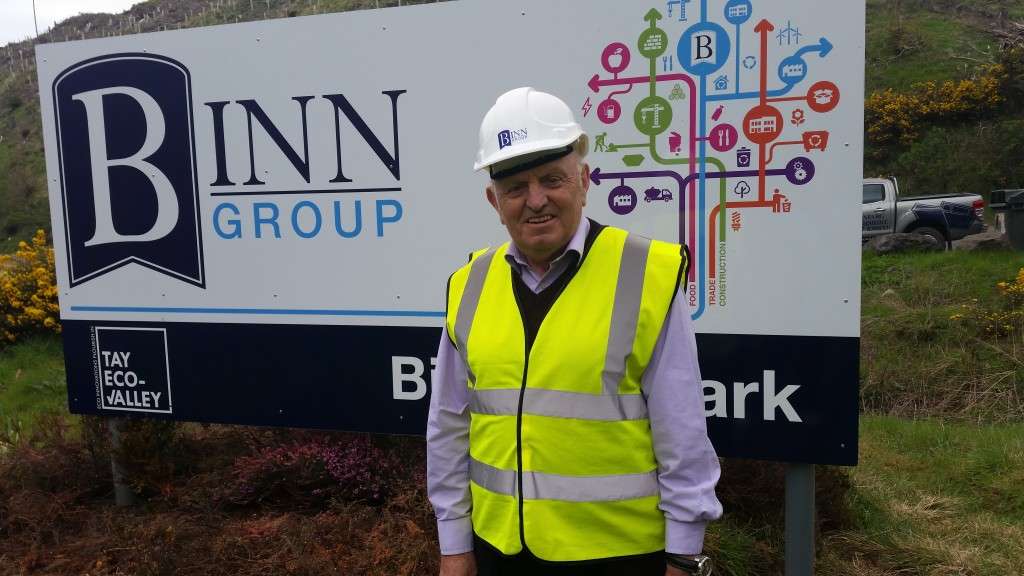 Outside the entrance of John MacGregor’s Binn Group http://www.binngroup.co.uk reception office is an old farm plough, the kind that years ago would have been hooked up to a horse for hours of back breaking work.

Beyond is the rolling, lush green Perthshire landscape, while close to one distant hill, sits John’s house. Alongside it – just what every boss needs – is the mini golf course he’s built so he can practice his swing.

Every so often another local authority refuse truck, or yet another Binn Group RoRo vehicle, makes its approach on the winding road leading to Binn Eco Park. On board, another cargo of waste destined to be turned into something far more useful.

Inside the office John, Binn Group’s chairman, is reflecting on the Perthshire firm’s remarkable success story. It’s one with roots firmly planted in the soil that was once churned by the likes of the old plough outside, yet is very much a modern tale of vision, smart thinking, and being in the right place at the perfect time.

The precise moment which set him on course to launch one of Scotland’s leading independent recycling and waste management companies, with a fleet of skips, vehicles and around 130 workers, could hardly be more unusual.

Who’d have thought a skip hire and waste management empire could be conceived, thanks to a chance comment from a Sixties pop star?

It was back in the early 1990s, and John was a successful farmer with 2000 acres of rolling Perthshire countryside, herds of Aberdeen Angus and Limousin cows and flocks of hardy sheep. As a sideline to the family farming business near Glenfarg, a quarry was put to use as a domestic and commercial landfill site.

A holiday break by John to Kenya where, bizarrely, he bumped into Freddie Garrity  – the ‘Freddie’ of Freddie and the Dreamers fame.

John takes up the story: “We became friends. He’d come to visit and I’d go to see him at home in Stoke-on-Trent.

“One day I was visiting, and saw he had a skip in the drive. I asked him how much that cost.
“He said £160. I thought that was a hell of a price for a skip. I got home and the first thing my son Allan and I did, was buy a second hand skip lorry and thirty skips.”

This was 2001. Today John is Chairman of Binn Group, son Allan is the firm’s Chief Executive, and another son, Colin, is involved in the wages side of the business. Together with a management team, they oversee a business of more than 130 staff and contract workers, which processes more than half a million tonnes of waste a year, delivered via a fleet of skips and lorries plus a regular stream of local authority and commercial trucks.

Some 63 acres of land, which was once simply just another section of Binn farmland, is now an ‘Eco Park’ complex. Along with Binn Group’s own waste recycling element, there’s also an anaerobic digestion facility for food waste, operated by Earnside Energy.

Land which once produced food for the table, is now helping to turn 16,000 tonnes of waste food per year – eventually it’ll be 30,000 tonnes – into electricity for the National Grid.

There are also two facilities run by Suez Environnement (correct). One is a dry mix recycling plant, which handles the kind of waste found in a typical council collection recycling bin, and the other a timber waste recycling operation which prepares materials for use at a Fife biomass energy facility.

But it’s the material that arrives via the Binn Group’s fleet of more than 50 vehicles and massive collection of skips, which is at the heart of the operation.

From two yard to 16 yard skips, to RoRo containers ranging from 20 cubic yard capacity to 50 cubic yard, plus a range of enclosed containers, means there is a constant flow of mixed materials arriving to be hand and mechanically sorted.

Non-recyclable produce, which once went to the site’s landfill, is now sent to a solid recovered fuel (SRF) reprocessing plant where it is dried, shredded and packed into bales ready to be exported in 3000 tonne loads, from Dundee to Denmark and Holland, for use as fuel in cement kilns.

Nearby, other materials are sorted ready for collection to be taken away and recycled – there are piles of tyres, wood and all the usual detritus of modern life you’d expect to find chucked in a typical skip.

Recently Binn Group signed a contract with a local authority to handle all their green and amber glass waste. The business also advises companies on waste, runs an events waste management service, and provides soil analysis for firms eager to check compost quality, or soil contamination.

In the past few weeks, they’ve taken over Perth skip hire and waste management firm, Holden Environmental Ltd, with plans to make the new acquisition part of a network of waste transfer stations.

And back at Binn Farm, there are plans to create a wind farm to provide the heat and fuel required to run the eco village, plus deliver warmth to a series of polytunnels growing vegetables and fruit which normally have to be imported from abroad.

It’s an awful lot to have emerged from a chat about the price of hiring a skip. “I originally thought I might end up with a few lorries,” concedes John. “Never did I really think we’d get as big as we have.

“There are not enough waste energy plants in Scotland,” he adds. “Landfill sites are running short, but the waste still has to go somewhere. We have to make something from it, we can’t just keep dumping it.”

Luckily, his shrewd move into waste management ran parallel with government pressure on businesses, local authorities, and householders to become smarter with their waste.

John has also made a point of nurturing strong links with the local community, sponsoring football teams and supporting small local projects, and is always keen to reassure neighbours of the positive side to the business.

Managing Director Brian Harkins says Binn Group is fulfilling a vital service. He added: “At times we’re like the fifth emergency service. We are good at doing a job that many companies today need done.

“The business was originally a safe pair of hands in the skip hire sector. Now we are dealing with national construction companies, and we’re dealing with government bodies that we’d never had contact with before.”

Back in what was once his farmhouse home, and is now the Binn Group offices, John’s connection with the land is complete. Fields once used to produce food are now helping to produced vital fuel, while the family farming business is still going strong, and the next generation – Allan and Colin – are on board.

It could even be described as a bit of a dream come true. One that’s thanks, in part at least, to a Sixties star called Freddie.