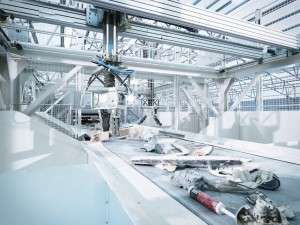 Sort it out: Are robots the waste sorters of the future?

Many manual industries are witnessing radical change due to the rise of robotics and artificial intelligence. And, it is  believed by some in the sorting industry, that within just a few years, sorting of waste by hand will become a thing  of the past.

Currently estimations suggest that approximately 700 million tonnes of waste is recycled by targets set out by the  EU Directives. The amount of waste will steadily increase as targets are achieved. Current EU objectives are that  by 2020, 70% of all waste is recycled or reused.

Waste separation is vital in the process of material recovery. Sorting waste has a variety of major benefits, including  the reuse of valuable elements and diversion from landfill.

The amount of waste-to-landfill is an imminent threat and a growing, global concern. With waste volumes  increasing and available land space decreasing, waste sorting is an imperative and environmental matter.

Separation is the procedure of parting waste into two or more useful waste streams. The characteristics of the waste will determine its value and profitability to the end user.

Recycling companies sort their particular waste as precisely as they can to ensure that the purity of each stream is at its highest and the material is therefore of a higher grade to the company buying the recycled product.

Demand for recycled materials is peaking, meaning the sorting of waste is a more prominent business model. Recycling waste is not just a case of recovering reusable materials, it’s an economic system. Presently, the cost of collecting, sorting and recycling outweighs their commodity value.

However, with consumers becoming more aware of the benefits of purchasing recycled products, the market is witnessing a period of growth.

Skip Hire Magazine visited one of the largest wood recyclers in Holland, Baetsen to see how the sorting of construction waste has become an economic and viable business model and how using robotics and artificial intelligence has changed their operational processes.

Like with any sorting business, construction waste comes in in its entirety, from building sites. With land covering 27 acres, it’s clear to see why such enormous space is needed – Baetsen take in 130,000 tonnes of waste per year.

Whilst the original waste is with induction sorting via sensors and a trommel, when it reaches the specific sorting phase, the technology is impressive.

The Finnish robotic technology is intended to replace five manual workers. The robot is programmed to specifically sort waste streams and is ‘taught’ over a period of time to be highly specific and sophisticated.

For the first two weeks, the robot has the capability of processing around 40-50% of what it is intended he must do. After approximately two weeks, this is increased to 100% when the artificial bugs are detected and fixed.

How do the robots work?

The robots work on a visual/photographic technology. The waste is placed on the two-metre wide conveyor belt and images are taken via ten cameras, sensors and lasers – which determine the type of waste. This sensory data is then sent by signals to the ‘brain’ of the robot. This happens in milliseconds, enabling the robot to work faster and more accurately than the human hand.

The robot works relentlessly and is designed to catch heavy objects and pick them for sorting. In the space of an hour, the robot can lift, pick and sort up to 2,000 objects weighing up to 20kg each.

The smart gripper opens from 50mm to 500mm, enabling the sorting of waste at various different sizes and dimensions.

The system itself is multi-tasking. Each robotic arm can sort up to four fractions with high precision. It can sort a variety of different materials, including stone and plastic with an impressive level of purity at 98%.

Its high range of flexibility means that the robot can be adjusted to its waste environment and specifics.

The robots can be run for up to 24 hours a day and have very low operational costs of 10kw.

Timo Taalas, ZenRobotics CEO of ZenRobotics told Skip Hire Magazine, “The ZenRobotics Recycler is a great example of next generation waste sorting. We want to introduce new thinking to the industry.

“The system was designed to lower the cost of recycling and improve the efficiency. Imagine 24/7 waste sorting – that’s the benefit of automation.”

It’s easy to see why robots could very well be the future of the sorting industry. With their speed, throughput, precision and low-labour costs, replacing the manual sorting worker could be much closer in time than we would have imagined just a few years ago.